Dozens of extreme, wind-driven fires burned through forests and towns on the West Coast of the United States on Thursday, killing at least 16 people, forcing half a million to evacuate in Oregon alone, and destroying hundreds of homes, authorities said.

A spokeswoman for Oregon’s Office of Emergency Management announced late in the evening that some 500,000 people, about an eighth of the state’s total population, had been told to leave their homes. Thousands more were displaced north and south in the neighbouring states of Washington and California.

Including eight California fire deaths last month, the region’s reported death toll for this year is now at least 16.

Among those killed in the past day was a one-year-old boy who died while his parents attempted to drive out of an inferno 130 miles (209.2 kilometres) east of Seattle. They are both in a critical condition in hospital.

“This child’s family and community will never be the same,” said Washington Governor Jay Inslee, in a statement on the state’s first fire death of 2020.

“And neither will countless others who are reeling from the utter devastation these wildfires are leaving in their wake.”

Oregon has borne the brunt of some 100 major wildfires raging across the western US this week. Around 3,000 firefighters have been battling nearly three dozen blazes in Oregon, but fire officials say about twice as many are necessary to bring the fires under control.

“We have never seen this amount of uncontained fire across our state,” she told a press conference.

“We know that there are fire-related fatalities. And as soon as we are able to provide confirmed information, we will do so.”

Police have opened an arson investigation into at least one of the Oregon blazes, the Almeda fire, which started in Ashland near the border with California, according to local police chief Tighe O’Meara.

O’Meara said he expected the death toll from the Almeda fire, initially blamed for two of Oregon‘s fatalities, to rise as search teams combed through the ruins of homes that burned amid a chaotic evacuation.

The Oregon blazes tore through at least five communities in the Cascade mountain range as well as areas of coastal rainforest normally spared from wildfires. In eastern Washington state a fire destroyed most of the tiny farming town of Malden.

In central Oregon, search and rescue teams entered devastated communities like Detroit, where firefighters led residents on a dramatic mountain escape after military helicopters were unable to evacuate the town.

A 12-year-old boy was found dead with his dog inside a burned-out car and his grandmother was believed to have succumbed after flames engulfed an area near Lyons, about 50 miles (80 km) south of Portland, the Marion County Sheriff’s Office said.

To the south, a Reuters photographer saw small communities near the city of Medford reduced to ashes as he drove south towards Ashland.

Some people expressed relief after escaping the Bear Creek trailer park where nearly every house burned.

“Thank God we were at home,” said Julio Flores, who escaped with two children who would have been alone had his restaurant working hours not been cut due to the coronavirus pandemic.

Oregon firefighters put out embers in Mill City, as tens of thousands of people fled blazes along the West Coast of the US and officials warned the death toll could rise [Kathryn Elsesser/AFP]

Firefighters said unusually hot, dry winds from the east had supercharged the blazes, spreading flames from community to community, and then from house to house.

“When it really gets windy these embers are going for miles,” said Firefighter Andy Cardinal in Eagle Point, north of Medford where the town of around 10,000 was on standby to evacuate.

“We have never seen this amount of uncontained fire across the state,” she said. “We are feeling the acute impacts of climate change.”

Climate scientists say global warming has contributed to greater extremes in wet and dry seasons, causing vegetation to flourish then dry out in the US west, leaving the kind of debris that can easily catch fire.

By evening, two of Oregon‘s largest fires, burning around 24 miles (38.6 kilometres) southeast of the centre of Portland, had merged, leading to a major expansion of evacuations in densely-populated Clackamas County, emergency management spokeswoman Bobbi Doan said.

Asked whether areas of Portland itself might be evacuated, Chief Deputy State Fire Marshal Mariana Ruiz Temple said everything would depend on wind direction and force.

In California, officials said some 64,000 people were under evacuation orders while crews battled 29 major fires across portions of the most populous state in the US.

About a third of those evacuees were in Butte County alone, north of Sacramento, the capital, where the North Complex wildfire has scorched more than 247,000 acres (999.57 square kilometres) and destroyed more than 2,000 homes and structures.

The remains of three victims were found in two separate locations of that fire zone, according to Butte County Sheriff Kory Honea, bringing the total death toll from California wildfires so far this summer to at least 11. 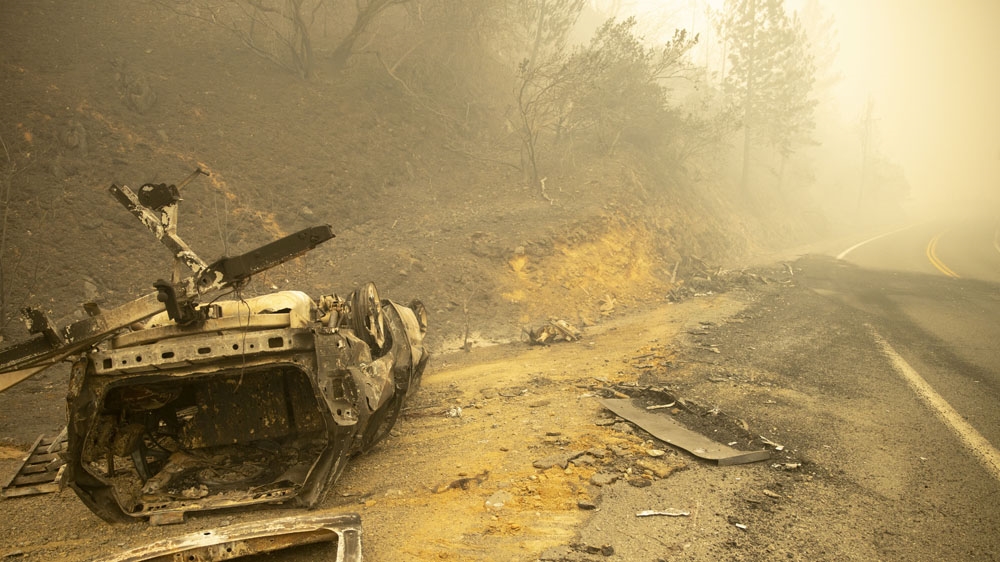 Tina Rose, 29, fled her home in central California after seeing the mountain in front of her house “glowing red” from the flames of the fire.

“We were packing everything and you can hear the propane tanks just exploding … and when we heard the second one we were just like ‘we need to go in case it does move faster’, because you never know,” she told AFP.

“It is something we never want to experience again,” she said, speaking from her brother-in-law’s home.

Wildfires have now burned across a record 3.1 million acres (12,545 square kilometres) in California this year. Six of the top 20 largest wildfires in the state’s history have also occurred in 2020.

In the San Francisco area, the deep orange sky caused by the smoke from the fires gave way to a wintry grey, but cars were still forced to drive with lights on in the gloom.

Polluted air meant schools and daycare centres were no longer letting children play outside, while the elderly and vulnerable individuals were encouraged to stay inside.

The strong, dry winds of the past days appear to have eased off across much of the state, with severe weather warnings lifted for most of California. Humidity is expected to rise as temperatures cool into next week, providing some relief, Cal Fire said.

California’s deadliest fire took place two years ago when 86 people were killed in the town of Paradise.

Ex-workers sue Kroger, claiming they were fired for refusing to wear rainbow symbol