The death of a Colombian man after being repeatedly shocked with a stun gun by police who restrained him has sparked riots and protests throughout the Andean nation. The protests continued into Thursday morning and killed at least seven and wounded more than 150, the country’s defence minister said.

Javier Humberto Ordonez, a 46-year-old lawyer and father of two was allegedly violating coronavirus social distancing rules when he became involved in an altercation with police in the early hours of Wednesday morning.

In a video posted on social media by friends who were with him, Ordonez can be heard shouting, “please, no more, I’m suffocating” as two police officers continued to restrain him with their knees on his back and repeatedly tasing him. Ordonez was taken into police custody early on Wednesday where family members have alleged he faced more police abuse. He died in hospital soon after.

Colombia had a six-month coronavirus pandemic lockdown that began in late March, with the harsh restrictions eased two weeks ago.

Protesters took to the streets in Bogota on Wednesday afternoon, destroying the small police station that the responsible officers belonged to in the Engativa neighbourhood, in the west of the city. Violence continued and spread into the early hours of Thursday.

Bogota’s Mayor Claudia Lopez called the police brutality “unacceptable”, but also condemned the violence in Bogota that resulted in deaths.

“Yesterday, Bogota woke up with reason, in pain, protesting the death of a citizen because of police abuse,” the distraught looking mayor said in a Twitter video posted early on Thursday. “But today we wake up with not only one, but three dead, killed in protests and extended violence … destroying Bogota is not going to fix the police.” 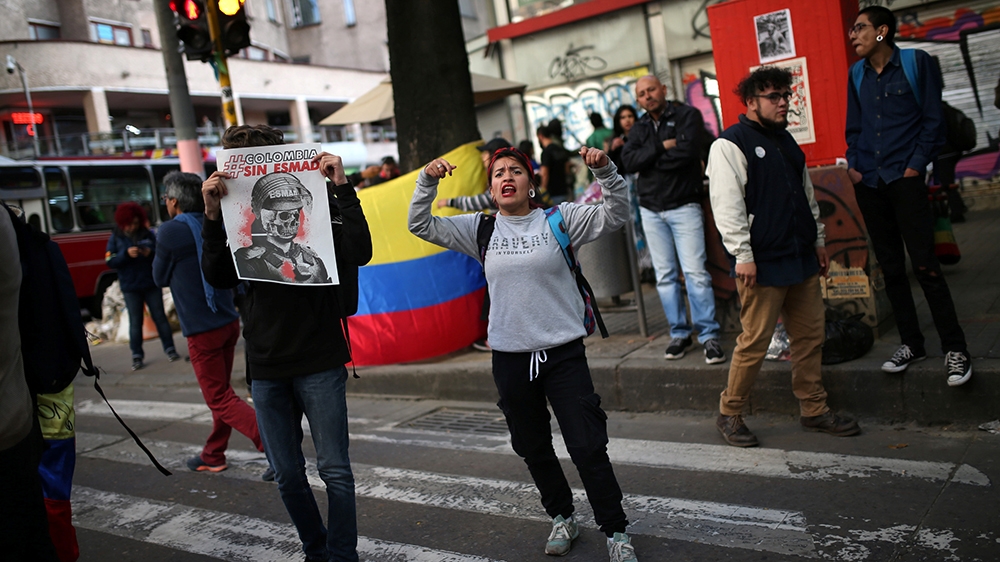 Protesters chanting during a demonstration in honour of Dilan Cruz, a teenage demonstrator who died in 2019 after being injured by a tear gas canister in Bogota, Colombia [File: Luisa Gonzalez/Reuters]

As the news of the alleged police brutality spread, protesters took to the streets on Wednesday night not only in Bogota, but also in the cities of Medellin, Pereida and Ibague, attacking police stations and public transport infrastructure.

“The reports of the events that occurred in the last hours reveals atrocity and vandalism. These events cast a shadow over society since they claimed human lives,” Trujillo said.

The government announced the two officers involved have been suspended pending an investigation, and an autopsy on Ordonez would be carried out.

The latest unrest comes two days after unsuccessful attempts were made to revive protests by workers’ unions to protest the economic and social policies of President Ivan Duque which had brought tens of thousands of people into the streets in late 2019. The government responded by sending heavily armed riot police into the streets and imposed curfews in major cities.

“With last year’s November protests, the government action to quell them and the coronavirus, this basically put a lid on a lot of social angst that was happening in Colombia,” political analyst and director of Colombia Risk Analysis, Sergio Guzman told Al Jazeera.

“I think that because the entire issue has not just been mismanaged by the government but just miscommunicated, this [recent action] really threatens to blow up as a significant event.”

He said the current protests reflect not only anger and frustration over police actions, but are also about the lack of political will to investigate wrongdoing.

“I expect this is the start of a much bigger period of political unrest that will coincide with the governments plans to open the economy, so this is going to be a major set back in some of these plans,” Guzman said.

“There is a lot of discontent about unresolved issues which were quieted due to restrictions,” Gimena Sanchez-Garzoli, Andes director for the advocacy group Washington Office on Latin America (WOLA) said.

“The ongoing use of the stun gun after the lawyer is clearly disarmed and not fighting was not necessary. Disproportionate use of force in Colombian police forces is not a new problem neither is the misuse of weapons meant to disperse protests or pacify.”

“Citizens have every right to protest and should do so peacefully.”