North Carolina caps outdoor gatherings at 50 people to prevent the spread of the novel coronavirus, but do not tell that to President Donald Trump.

He basked in a largely mask-less crowd of several thousand supporters during a campaign rally in the state, which is set to be critical to the upcoming US election.

“As far as the eye can see,” Trump said, revelling at the sight of people flouting public health guidelines at Tuesday’s event. “I really believe that these crowds are bigger than they were four years ago.”

A day earlier in Pennsylvania, Trump’s Democratic challenger, Joe Biden, held a meeting in a backyard ensuring social distancing. His team has been so attentive to local regulations that some staffers have left the room if they risked breaking the rules on crowd limits.

“I really miss being able to, you know, grab hands and shake hands,” Biden recently told supporters. “You can’t do that now.”

With less than eight weeks until the November 3 election, Trump and Biden are taking diametrically opposite approaches to campaigning amid a pandemic – and the differences amount to more than political theatre.

The candidates are effectively staking out different visions for the country. Biden emphasises guidelines supported by local health officials, while Trump rails against restrictions that he argues, without evidence, are politically motivated.

“By the way, your state should be open,” the president said in North Carolina, where he has feuded with Democratic Governor Roy Cooper over Trump’s abandoned plans to hold the Republican National Convention in Charlotte.

“It’s you, it’s Michigan, it’s a couple others,” Trump added, as he sees a line of attack in pivotal states run by Democrats.

Trump aides and allies suggest the president sees his rallies as a manifestation of the reopening he is preaching and that he believes is vital to the economic recovery and what voters want.

In a dig at those who warn against reopening too quickly, Trump suggested that these states would suddenly reopen the day after the election, when opponents advocating caution can no longer hurt his re-election.

At the same time, it has pitted the president against the public health advice issued by his own administration and drawn criticism from Dr Anthony Fauci, the nation’s top infectious disease expert.

Fauci told CBS on Wednesday that he is frustrated by Trump’s return to campaigning. “We want to set an example,” he said of those in leadership.

Outdoor events used to be few and far between for Trump, who prefers the deafening echo and air conditioning of indoor arenas.

In the wake of a June rally in Tulsa, Oklahoma, when the president addressed a half-empty arena and a promised five-figure overflow crowd never materialised, his campaign decided to move to lower-stakes airport hangars and tarmacs. 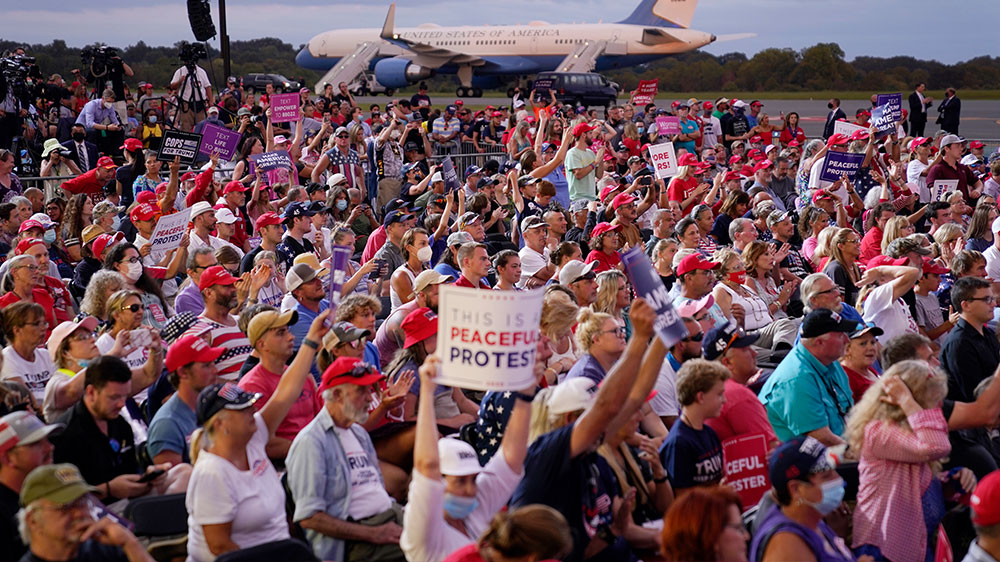 The Trump campaign decided to move to lower-stakes airport hangars and tarmacs after a low turnout at an arena in Tulsa, Oklahoma [Evan Vucci/AP Photo]

The one thing that has stayed the same: crowing about his crowd sizes in comparison with Biden’s.

Biden’s crowds, in fact, have been far smaller.

The former vice president has appeared in public sparingly since the pandemic, and with the strictest adherence to state guidelines: 25 people in Pennsylvania, 10 people indoors in Michigan and mandatory face-coverings all around. Biden’s approach reflects the reluctance of many of his supporters to attend large gatherings.

For someone who has never been a natural in an arena, the smaller events allow Biden to have more personal interactions with representatives from important voting blocs, including labour and community leaders.

But they allow him to largely avoid any controversy created by a critical questioner or a protester, both of whom he was forced to grapple with multiple times when campaigning before the pandemic.
Even when Biden is confronted with organic crowds of supporters, he is rarely given the opportunity for an unscripted interaction with them.

As Biden gave a speech last week focused on the Trump administration’s response to the coronavirus at a university building in Pittsburgh, a crowd of more than 100 gathered and continued to arrive even as his event wrapped up. 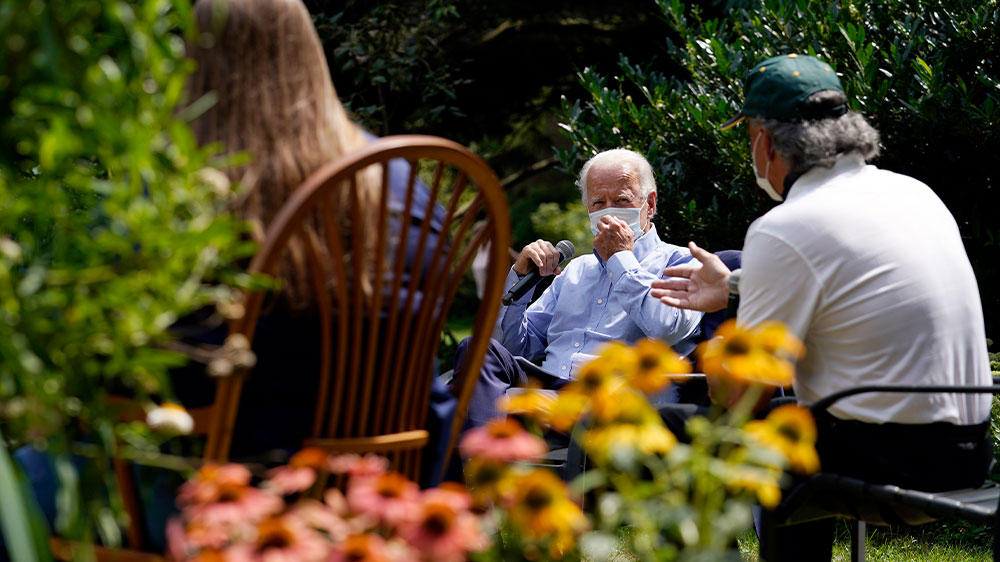 Biden has appeared in public sparingly since the pandemic was declared, and with the strictest adherence to state guidelines [Carolyn Kaster/AP Photo]

They chanted “We want Joe!” and waved Biden signs, some of them homemade. But, after his speech, Biden remained inside the building to attend a virtual fundraiser, then abruptly left to pass out pizzas at a nearby firehouse without approaching the supporters.

Three days later, after Biden visited Kenosha, Wisconsin, he and his wife, Jill, stopped at the home of a supporter in Wauwatosa, a Milwaukee suburb.

With so many people confined to their homes, the presence of Biden’s motorcade on a small street drew more than 200 people out onto their porches or the street. The Bidens spent more than half an hour meeting in a quiet back patio with two teachers and a parent concerned about how to resume in-person learning during the pandemic.

The crowd cheered and chanted “Go Joe!” but the private meeting ran so long that Biden only interacted with them for less than a minute. As he was leaving, he walked to the middle of the street and then, surrounded by Secret Service agents, bellowed, “Don’t forget to vote!”