In the biggest and boldest protests since Thailand’s 2014 coup, students and young activists – intent on shaking up a stultifying political order – are taking on the country’s most powerful players: King Maha Vajiralongkorn and general-turned-Prime Minister Prayuth Chan-ocha.

Borrowing from Harry Potter, the Hunger Games and other pop culture hits, the protesters have been holding near-daily demonstrations for more than a month.

They are calling for systemic democratic reforms – the dissolution of parliament, an end to harassment of opponents, amendments to the constitution – as well as curbs on the king’s powers, a long-standing taboo in Thailand where criticism of the monarchy is punishable with up to 15 years in jail.

“It’s all very exciting,” said Pavin Chachavalpongpun, a Thai academic and prominent critic of the monarchy who lives in exile in Japan. “The protesters are young; they are social media savvy. They use new and creative tactics in their protests. They have many different leaders. And most importantly, they have clear demands. This could be a new turning point in Thai politics.”

The triggers of the protests – which appear to be gathering momentum, recently drawing in high school students and labour unions – are wide-ranging.

Key among them is the close ties between the monarchy and the military, an alliance some protesters have denounced as “enemy to the principles of democracy”.

Prayuth, who seized power after Thailand’s second coup in as many decades, scrapped the country’s constitution in 2014 and had the military write a new charter that increased the king’s powers and entrenched the pro-military royalists.

The document, ratified in April 2017, months after King Vajiralongkorn took the throne, removed the need for the monarch to appoint a regent when he travelled overseas, and allowed the military to appoint a 250-member Senate that was to have a say in selecting the new prime minister.

In the long-delayed general election that was finally held in March last year, the pro-military Palang Pracharat came second but Prayuth remained prime minister, with the backing of the unelected Senate and the support of smaller parties.

‘Closer to an absolute monarchy’

At the same time, King Vajiralongkorn was moving to consolidate his personal position.

In July 2017, the military-appointed legislative assembly amended the royal property law to give the king full control of the Crown Property Bureau, which manages the crown’s estimated $30bn fortune.

Then, in October of last year, the king also placed two army units directly under his control, moves Joshua Kurlantzick at the Council on Foreign Relations, called an indication of Vajiralongkorn’s intent to push the country “closer to an absolute monarchy”.

Writing in the World Politics Review, Kurlantzick said the new king was not like his late revered father, Bhumibol Adulyadej, who intervened in politics in secret or via proxies. Instead, Vajiralongkorn has “managed to maneuver himself to the centre of Thai politics, decreasing the power of both the army and politicians along the way”.

Thailand’s Prime Minister Prayut Chan-ocha standing in front of a portrait of King Maha Vajiralongkorn while receiving a copy of a July 16 speech by the monarch at a ceremony in Bangkok [File: Handout/ Royal Thai government via AFP]

The new king’s overt involvement in politics – combined with his preference to spend much of his time outside Thailand, even during the coronavirus pandemic – prompted a backlash, with critics taking to Twitter in March to question the role of the monarch. The hashtag #whydoweneedaking started trending and on March 22, it was used more than 1.2 million times, prompting a government minister to warn Thais against breaking laws on online content.

Thongchai Winichakul, professor emeritus at the University of Wisconsin-Madison, said the 2014 coup “brought back strong waves of ultra-royalism” to Thai society, boosting the king’s standing. At the same time, “it is no secret that the coup regime remains in power due to the support of the palace,” he said.

To make matters worse, the entrenchment of the monarchy and the military in Thai politics was accompanied by a crackdown on critics and dissidents.

Late last year, the Constitutional Court disqualified Thanathorn Juangroongruangkit, a 41-year-old billionaire popular with young voters, from the parliament for holding shares in a media company on the date he registered as a candidate for the election.

Then, in February, the top court went on to dissolve Thanathorn’s fledgeling pro-democracy Future Forward Party, which rode a wave of popular support to win the third-highest number of seats in parliament. The disbanding of the party prompted protests at the Chulalongkorn University in central Bangkok, with students laying out a funeral wreath labelled, “RIP Democracy”.

“The rapid rise and success of the Future Forward Party in the 2019 election was phenomenal,” said Thongchai. “The main source of its success is the young generation. In retrospect, it represented the brewing dissatisfaction that is erupting today. The Future Forward Party was outspoken on many issues including opposing the building up of military force under the direct command of the palace.”

He added, “Only politically naive people would believe that the party’s dissolution has nothing to do with its progressive politics and its criticism of the monarchy.”

The student protests, after subsiding briefly because of the pandemic, resumed in June with the disappearance of Wanchalearm Satsaksit, a dissident who was kidnapped from outside his apartment in Cambodia’s capital, Phnom Penh. He was the ninth Thai activist to have disappeared from Laos, Cambodia and Vietnam after fleeing the 2014 coup, according to rights groups.

The demonstrations gathered pace in late July, with several protesters burning portraits of Prayuth near the Government House in the capital, Bangkok, and scores more staging a run around the city’s Democracy Monument, singing an altered jingle to the Japanese cartoon, Hamtaro. The revised lyrics described the government as hungry hamsters devouring taxpayer money.

A Harry Potter-themed protest followed on August 3, with hundreds of people dressed in wizard costumes waving chopstick-wands in the air and casting mock-spells to protect Thai democracy. There, for the first time in decades, Anon Nampa, a 35-year-old human rights lawyer, openly called for reforms to the monarchy.

“We must be able to speak about this publicly,” he told the crowd. “If we don’t discuss it, we will never be able to fix the problem … I speak so that the institution can exist in the society rightfully, under a democracy with the king as head of state.” 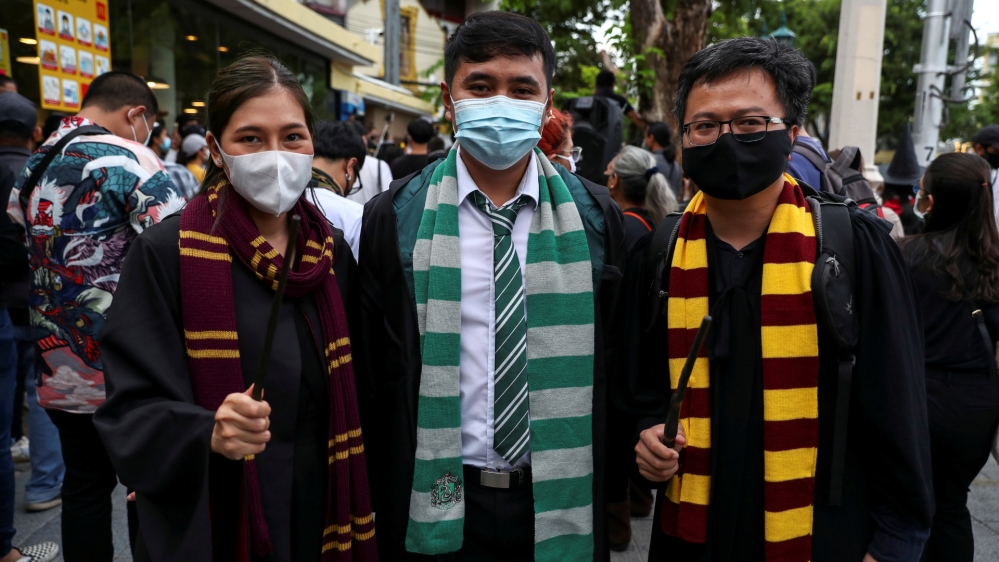 A group of students followed up Anon’s speech with an even more detailed call for reform, presenting a 10-point plan on August 10, calling on the king not to “endorse further coups” and to revoke the country’s harsh lese majeste laws.

The declaration from the Student Union of the Thammasat University lambasted the “mutually beneficial” ties between the army and the military, saying, “Such a situation constitutes an enemy to the principles of a democracy with the king as head of the state.”

‘Young people are fed up’

On August 16, an even larger crowd of more than 10,000 people gathered in Bangkok, in support of the students’ call for democracy and monarchy reform. Two days later, pupils at more than a dozen Thai high schools raised the three-finger Hunger Games salute, while many others sported white ribbons in a show of support for the protesters. 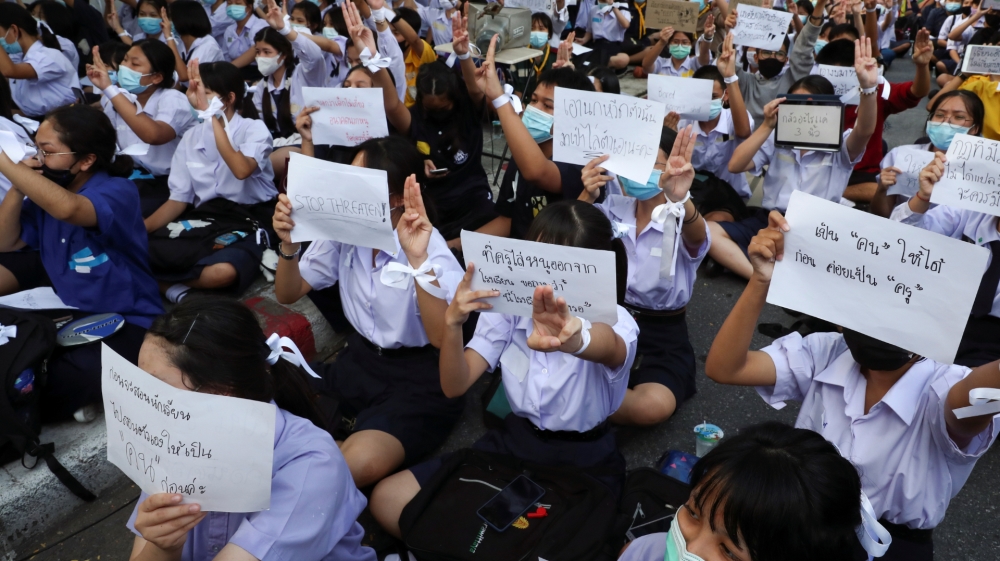 Students make the three-finger salute as they hold placards to show support for the student-led democracy movement outside the Education Ministry in Bangkok, Thailand, August 19, 2020 [Athit Perawongmetha/ Reuters]

Matthew Wheeler, senior analyst at the International Crisis Group, said the growing protests showed that “many Thais, especially young people, are fed up” with the current social and political order.

“The king is at the pinnacle of this hierarchy,” he said. “The government, born of a coup d’etat, has borrowed legitimacy of the monarchy to justify seizing power and instituting a political order that reserves power for an unelected elite.”

As the protests mount, the government has cracked down by arresting student leaders, rappers and activists, including Anon, the human rights lawyer, for taking part in the demonstrations. It has also moved to shut down online forums for debate, including a Facebook Page called the Royalist Marketplace, run by Pavin, the exiled academic in Japan.

But with Prayuth saying the king did not want prosecutions under the lese majeste laws, none of those detained has been charged under the harsh laws.

Wheeler said the students protests had put Prayuth’s government in a tough spot.

“The government will not easily relinquish their power and privileges. But there is little they can do at this point to quash the movement, short of repression on a massive scale that would hardly serve their interests,” he said.

“It is also likely that any crackdown will cause a backlash against the government and greater support for those demanding change.”