Beirut, Lebanon – Hassan Nabha, 27, is among 6,000 people injured during the blast at Beirut’s port. Many are expected to fully recover from their wounds, but Nabha is among those who may not.

When the young engineer left his home on the morning of August 4, he thought it would be a normal workday at the internet service provider company he worked at.

But with his workplace located near the site of a deadly blast caused by the detonation of nearly 3,000 tonnes of ammonium nitrate at Beirut’s port, that day changed his life forever.

“The moment I saw the smoke rise, I believed it was the end and I was dead,” said Nabha.

“I regained some balance, but I couldn’t feel my eye or my hands. My face was like dough, full of glass and drenched in blood,” he recalled.

“But my legs were working so I ran for my life,” said Nabha. He saw bodies and dozens of injured people on the streets of Gemmayze, before he found an ambulance that took him to a hospital.

Although Nabha lived to tell the tale, the force of the explosion left him half-blind and “scarred for life”, he said, as he sat on the balcony of his family home in Khaldeh, just south of Beirut.

“I can’t see with my left eye, my face – which took 400 stitches to sew up – looks deformed, and I don’t know if my finger will be useable again,” said the young man.

Sitting across from him, Nabha’s father, Ali, recalled how his son was unreachable for hours before someone contacted the family telling them where to look.

“I rushed through the hospital like a crazy man, uncovering sheets pulled over dead bodies,” said Ali.

He choked on his words, stopping for a moment before he could continue. “I didn’t want to find him.”

Filled with grief, the father pulled out his phone and flicked through photos of his son from before the incident.

“Look how beautiful he was,” he said as he proudly showed an image of a handsome blue-eyed man with slick dark hair combed neatly back. To a stranger, there was little resemblance between the two.

“I have seen dark days, death and destruction during the civil war, but nothing broke me like seeing my son this way,” said Ali, tears rolling down his face.

He appeared to blame himself for what had happened.

“When he told me a few years ago that he wanted to move to Canada, I insisted that he stay,” said Ali, shaking his head regrettably before lowering his gaze to the floor.

Hassan Nabha is among at least 150 people who have been disabled – in one way or another – as a result of the blast, according to a health ministry tally.

“The number might be even higher, but we are still in the process of combing through cases at various hospitals before reaching an exact tally,” said Joseph al-Hilw, director of medical care at the ministry.

“Most of the long-term disabilities are blindness or loss of limbs,” said al-Hilw.

He added the ministry was fully responsible for the lifelong treatment of all Lebanese victims of the blast – including the cost of prosthetic limbs and reconstructive eye surgeries – whereas UN agencies would have to fund the treatment of Syrian and Palestinian refugees.

Ibrahim Omeis, a neurosurgeon at the American University of Beirut Hospital – one of the busiest the night of the blast – said the bodies of many victims were severely scarred and will require extensive reconstructive surgery.

He added: “And even if many victims’ physical injuries can be treated, many more suffer post-traumatic stress symptoms which will take much longer to overcome.”

Even more devasted by his injures was Mohamed Da’douey, a 40-year-old who worked as a driver at a security company that was also located along the port.

Da’douey was in his car, ready to go home after a long day at work, when the explosion hit at 6:18pm local time. His car was parked just 50 metres away from the infamous Hangar 12 at Beirut’s port where the ammonium nitrate was stored.

Speaking from his hospital bed in Ajaltoun, north of Beirut, Da’douey explained the blast left him blind in his left eye, with only 20 percent vision in his right one, an amputated leg, and an arm that he may never be able to use again.

He said although three weeks after the explosion his condition was stable, the injuries he sustained had altered his life forever and left him permanently disabled.

“The worst thing is being blind,” said Da’douey. “Without an eye I am nothing. I’m half a man,” said the father of three.

Da’douey and his family said they would demand a prosthetic limb and eye surgery, as well as compensation from the state for his vehicle that was destroyed in the blast.

“My car was the only thing I had to get around and take my children out over the weekend,” he said. “But now I don’t know if I’ll be able to see or walk again.”

Like most Lebanese – many who have been taking part in mass anti-government protests since October last year – both men held a “corrupt government” and “neglect” responsible for what happened that day.

“If this was a war, I could overcome it,” said Da’douey. “But it wasn’t a war and there wasn’t an enemy.”

Despite their severe and life-altering wounds, the resilient men are adamant to recover and lead as much of a normal life as possible.

“I have a family that depends on me,” said Da’douey. “I need to get up and provide for them.”

Likewise, Nabha said he had not given up on his dream of going to Canada, but this time he wants to go with his fiancee Taj.

“It didn’t happen a few years ago, but I’m adamant to pursue my dreams,” said Nabha. “There’s no future here anyway.”

But even for victims who did not lose an eye or a limb, the effects of the incident will never leave them.

Hussein Haydar, a 27-year-old who worked at the same company as Nabha, is able to see but still has glass stuck in his right eye and scars all over his face.

“These scars,” he said pointing at his cheek as he sat in his family home in the Dahiyeh suburbs of Beirut. “They will remain with me – a memory forever.” 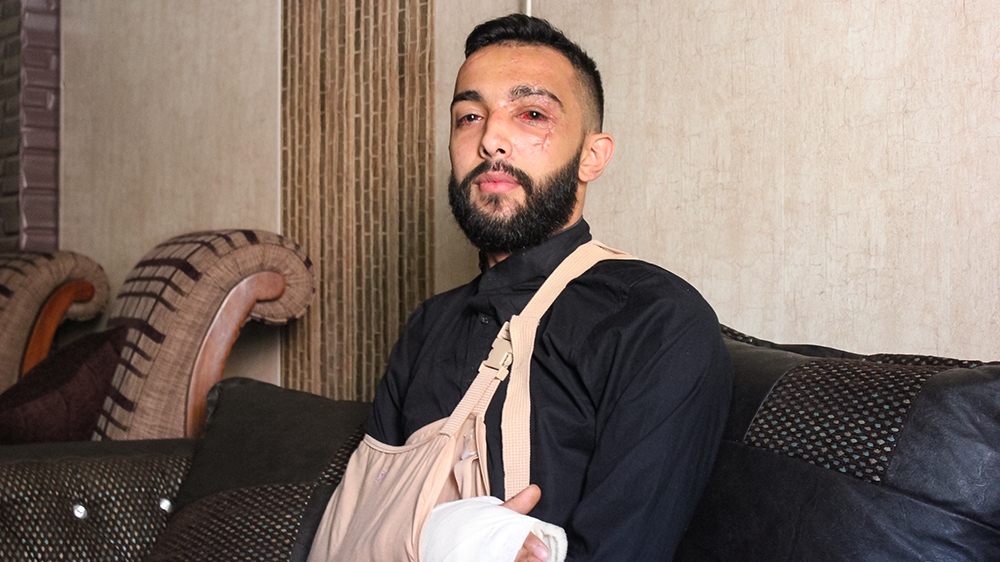