Islamabad, Pakistan – Walking through the Karachi Company bazaar in the Pakistani capital Islamabad, the coronavirus pandemic seems a world away.

Groups of shoppers gather at the small stalls that line the alleys of the market, selling everything from plastic stools to jewellery and colourful garments. Hardly anyone wears a mask, as they haggle over prices and stall owners shout to try and get the attention of potential customers.

“The danger is much less now,” says Sheikh Usman, 32, who runs a small garment stall and has not worn a protective face mask for months. “The restrictions should be finished, because the virus is over now.”

With a population of 220 million, a ramshackle health and hygiene infrastructure and densely packed urban neighbourhoods, Pakistan was considered by many to be a prime candidate to see the worst of the coronavirus pandemic.

The decrease in numbers is real, there is no doubt there.

Six months after registering its first case, however, active cases in Pakistan are continuing to steadily decline, with the number of deaths recorded in a day often down to single digits.

The country has seen 293,261 confirmed cases of the novel coronavirus, with 6,341 related deaths, according to official data. Save for single-day blips, active cases have been steadily declining since hitting a peak in June, currently standing at 10,091, their lowest level since late April.

Epidemiologists, however, warn that far from having weathered the storm, the country may be on the cusp of a second wave, primed to potentially hit as large religious gatherings are held this week, and wedding halls and schools are to be reopened by next month.

Critics say testing in the South Asian country has been low, resulting in an underestimation of cases. On Sunday, Pakistan conducted 23,655 tests, with 496 of them returning positive. The government says it has the capacity to conduct up to 67,340 tests a day, but people are simply not seeking them.

Pakistan’s positive test rate – a key indicator as to whether there is adequate testing – was 2.09 percent on Sunday, well within the World Health Organization’s 5 percent threshold for indicating that a country’s outbreak is presently under control [File: KM Chaudary/AP Photo]

“Before, the kind of lines we saw for COVID-19 testing, we used to have to turn people away to come back the next day,” says Seemin Jamali, executive director of the Jinnah Postgraduate Medical Centre (JPMC), the largest government hospital in Karachi, Pakistan’s most populous city.

At present, the hospital’s 90-bed COVID-19 ward only has 14 patients – a far cry from June, when patients’ families in Karachi and other cities told Al Jazeera they were having difficulty finding hospital beds for their dying relatives.

“The decrease in numbers is real, there is no doubt there,” says Dr Faisal Mahmood, head of infectious diseases at Karachi’s Aga Khan University Hospital, the country’s largest research hospital.

“We are seeing less positivity in the lab. We were doing pre-op testing ahead of surgeries, and the rates of those have come down as well.”

Pakistan’s positive test rate – a key indicator as to whether there is adequate testing – was 2.09 percent on Sunday, well within the World Health Organization’s 5 percent threshold for indicating that a country’s outbreak is presently under control.

“The tougher question is why, and the answer to this is the million-dollar question. We are not seeing that huge explosion that we had anticipated,” says Dr Mahmood.

The data was coming in, they were being collated and there were numerous agencies, with army and civilians both, working on [keeping the cases low].

Several factors – including the phased implementation of lockdowns, effective hospital case management and treatment protocols and demographic and cultural factors – may have interacted to help achieve the outcome, doctors and epidemiologists told Al Jazeera.

“We were not hit as hard early on because of the lockdowns as well … and because we got hit with it later, we were able to shut things down whereas in other countries things had remained open [while the virus was initially spreading],” says Dr Mahmood.

Pakistan implemented a complete countrywide lockdown in March, shutting down businesses, markets and all but essential services for weeks. In April, that lockdown was eased in certain areas, replaced with a more agile strategy aimed at shutting down infection hotspots in specific neighbourhoods, without affecting areas around them.

“The data was coming in, they were being collated and there were numerous agencies, with army and civilians both, working on [keeping the cases low],” he says. 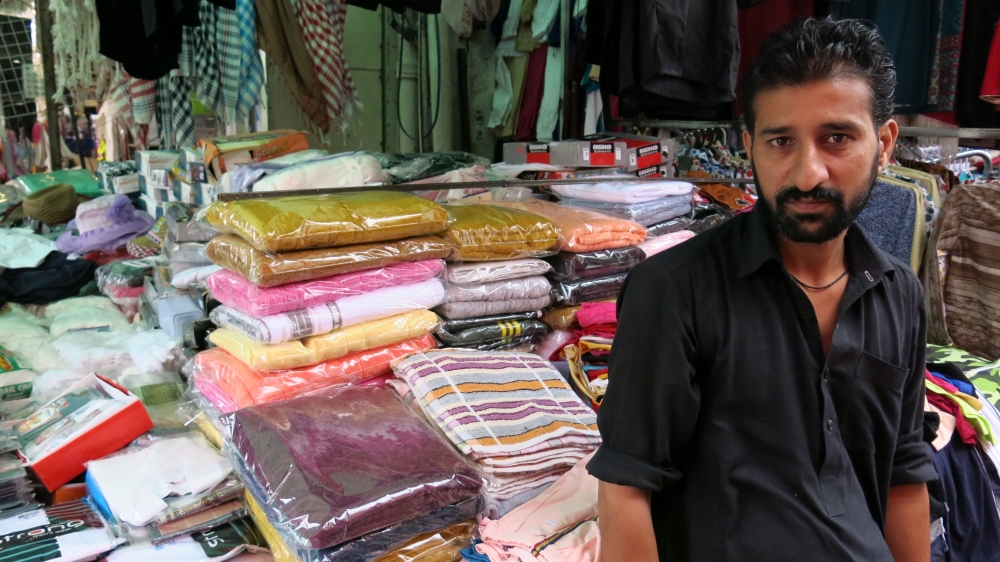 Sheikh Usman, 32, has not worn a protective face mask for weeks, and believes that ‘the virus is over’ [Asad Hashim/Al Jazeera]

Khan said Pakistan’s extensive polio vaccination programme, which consists of more than 265,000 community health workers and vaccinators, helped provide infrastructure to track and trace cases early on in the epidemic.

“The other advantage of this was that we are actually a lot better at treating it than some of the other places where it hit earlier. We had a lot of information to learn from,” said Dr Mahmood.

Pakistan’s age demographics may have played a part in lower death rates, too. An estimated 64 percent of the country’s 220 million population is under the age of 30. Worldwide, older patients have proven more susceptible to serious complications from COVID-19, and in Pakistan, the data is similar, with 76 percent of deaths among patients aged 50 or higher.

In addition, researchers have been gathering data since the start of the epidemic on possible higher physiological immunity among South Asian communities, where the mortality rate from the coronavirus has been markedly lower than in the Americas and Western Europe.

Pakistan’s case mortality rate – the percentage of patients who died after testing positive for coronavirus – is 2.16 percent, compared with 12.7 percent in the United Kingdom, 13.7 percent in Italy and 11.1 percent in France.

‘A disease of networks’

Weeks after the Eid al-Fitr Muslim festival, ahead of which the government had lifted most restrictions on businesses and public movement, the country saw an explosion of cases. In June, the number of cases almost tripled over 30 days, going from 76,398 to 213,470.

Hospitals began to reach capacityin major cities, with ventilators becoming scarce and patients dying because they were unable to get access to critical care beds.

This is a disease of networks. It doesn’t go through the whole population equally.

Almost a week after daily case rises hit a peak of 6,825 on June 13, however, daily new infections began to decrease once more, and have continued on a downward trajectory ever since.

Somewhat counterintuitively, the vast, rapid spread of the virus during Eid may have helped Pakistan saturate infection networks, which were then kept isolated through social distancing restrictions and limited lockdowns, say researchers.

“This is a disease of networks. It doesn’t go through the whole population equally,” explains Dr Mahmood. “We know we all have networks, and we all move within that network, and generally speaking you are confined within that network – your friends, family, co-workers, those are the people most susceptible to getting the virus from you.”

Moreover, not everyone is equally susceptible to being infected by the virus, highly contagious as it may be, says Dr Wajiha Javed, head of public health at the multinational pharmaceutical company Getz Pharma’s Pakistan division. The phenomenon is known as “population heterogeneity” in epidemiology.

“Because people are so different from each other, there are some people who are more susceptible and others who are less,” she says. “There are certain people who no matter how much you expose them, they won’t get it.” 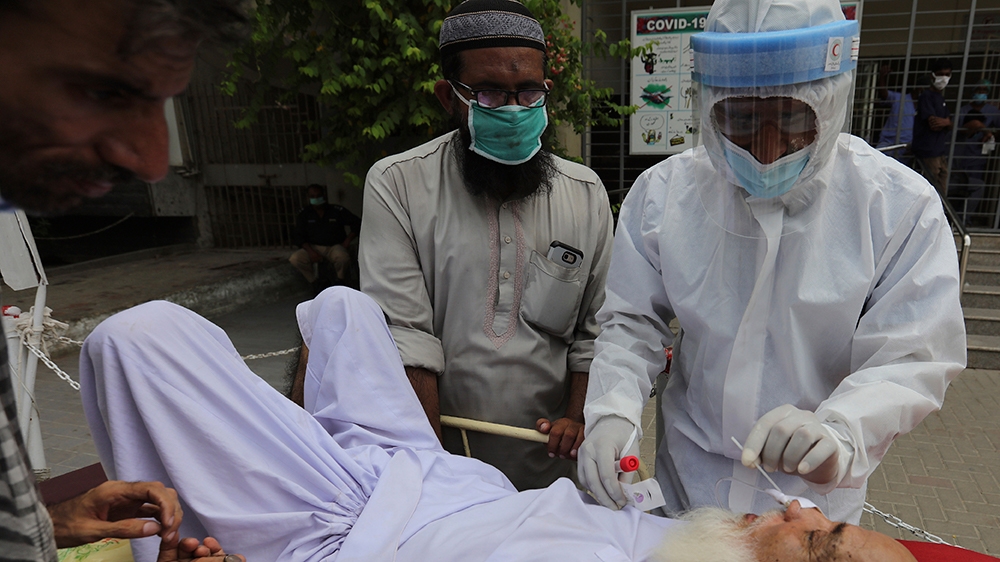 A health worker takes a nasal swab sample of an elderly man at a testing and screening facility in a hospital in Karachi [File: Fareed Khan/AP Photo]

The result, according to all three epidemiologists Al Jazeera spoke to, is that Pakistan may have reached a plateau in infections as social networks were saturated during the “super spreader” event of Eid al-Fitr.

“Those who could get infected got infected,” says Dr Khan. “Those who were not at risk, they never came on. So mainly everybody who was most susceptible got infected up front.”

That does not mean, however, that the danger of the coronavirus epidemic has entirely passed, they warn.

On August 14, Pakistan’s Independence Day, citizens across the country were seen taking advantage of the lifting of restrictions to gather in large crowds, celebrating in the streets of major cities while popping off fireworks or dancing to patriotic songs.

And this week, the country will see a large number of daily religious gatherings to mark the first 10 days of the month of Muharram, culminating in processions on the weekend to mark Ashoura, an event of great religious importance to Muslims from the Shia and other sects.

Both events, experts say, offer a particular danger: The potential cross-pollination of networks, exposing people to a vast number of people who are outside of their regular interactions, allowing the highly contagious virus to potentially find new avenues to infect pockets of those susceptible to it.

“The networks were all saturated [after Eid-ul-Fitr], but the thing about the big events like easing lockdown or August 14 or Muharram, what they do is mash people’s networks together,” explains Dr Khan. “So will there be a cross-pollination of infections across networks.”

We are not ready for a second wave.

Dr Mahmood agrees, warning that authorities will have to be vigilant for a possible second wave of rising new infections in September.

“[At these events] there is less mingling within your social group, and more outside, you’re more likely to meet people outside your group, so there is more chance therefore of new introductions into new networks,” he says.

Schools, too, could be a source of second wave infections, he says, with most educational institutions due to reopen countrywide in mid-September.

“Children are a very effective vector of respiratory illnesses and drive epidemics of this kind around the world,” he says.

Dr Javed, however, is more optimistic about the prospects of Pakistan having gotten over the worst of its epidemic. She conducted what has so far been the country’s largest seroprevalence survey, with almost 25,000 samples in a cross-section of office and healthcare workers in the southern city of Karachi.

Her study found that 17.5 percent of her sample population either currently had COVID-19, or had developed antibodies to it from a previous infection. Extrapolated out to the rest of the country, while limiting to the specific demographics of the survey, she estimates more than 4.2 million Pakistanis have already had the virus.

Others, though, are less sure of this conclusion.

“If you look at ‘herd immunity’ right now is actually saturation of these networks, that those in the networks have gotten it already if they were going to get it, and now we are going to see a bit more spill over into other networks,” says Dr Mahmood.

Either way, for doctors on the front lines of Pakistan’s coronavirus response, the fear of citizens taking the falling cases as a cue to stop following hygiene and social distancing guidelines is acute.

“I have a fear of the second wave because we saw the first one got very bad and so many patients lives were lost,” says Dr Jamali, chief of JPMC in Karachi.

“We are not ready for a second wave.”

Blast from the past? Earth to gain new MINIMOON and it could be the remains of an old rocket — RT World News