Beirut, Lebanon – More than two weeks after the Beirut blast that killed half of her family, Dima Steif, a 16-year-old Syrian refugee from Idlib, is still in shock.

Dima’s face is gaunt and emotionless as she recalls August 4, the day she lost her mother Khaldi and two sisters, 22-year-old Latifa and 13-year-old Jude.

Her 18-year-old sister Diana was wounded while her father was not home at the time of the explosion.

“We were at home, talking and laughing, when we heard the first explosion. We thought it was a fire, but then the next blow came and the whole earth shook underneath us,” said Dima, as she hugged a shaggy red stuffed animal that belonged to Jude.

Along with a printed scarf that Latifa used to wear and her own journal, the stuffed toy was among a few things Dima managed to pull out from the rubble of her family’s home days after the blast.

“The roof had already collapsed before we could get out of the house,” said Dima, who lived in Karantina, a poor Beirut neighbourhood near the port. They had come to Lebanon in 2014 after escaping the civil war in Syria.

Dima and her father have been temporarily staying at a hotel paid for by an aid organisation, while Diana is undergoing treatment in a Beirut hospital.

Dima’s family members were among many Syrian refugees who lost their lives on August 4.

A statement by the Syrian embassy on August 8 said 43 Syrians – almost a quarter of the approximately 180 victims – died when nearly 3,000 tonnes of ammonium nitrate exploded at Beirut’s port.

The UN refugee agency, UNHCR, said it received reports of the deaths of 89 registered Syrian refugees.

Omer Elnaiem, head of communications at the UNHCR, said: “The organisation has only confirmed 14 so far.”

Basma Tabaja, deputy head of the International Committee of the Red Cross (ICRC) delegation in Lebanon, said Syrians were particularly affected by the incident.

“A lot of Syrians worked at the port in offloading and loading cargo. Others lived in Karantina. That’s why many died or were injured,” said Tabaja.

Fatima Abumaghara, 35, fled Aleppo with her family in 2013. Her husband, Abdel Qader Balusso, died in the Beirut blast, leaving behind four young children.

The 43-year-old labourer was working in Karantina at the time of the explosion. After his death, Fatima said life was no longer worth living.

“We lost everything of meaning. Their father, the most valuable thing, is gone,” Fatima said as her two daughters, Nurulhuda, 13, and Farah, 18 months, huddled around her.

“The blast was even worse than what we experienced in Syria. At least, back there, we knew we might not live to see another day. But we never expected this here.”

In addition to the shock and a “constant struggle” to make ends meet before that, Fatima said her family has been the victim of discrimination since they moved to Lebanon.

“Life in Lebanon has been difficult every day,” said Fatima, explaining that, as Syrians, her children are regularly bullied at school and humiliated by their neighbours.

“We put up with all that for the sake of the kids’ future, but we’ve now lost any sense of safety and security.”

There are nearly one million registered Syrian refugees in Lebanon, having moved there since the start of the civil war in 2011, according to the UNHCR.

Thousands of them were affected by the blast, said Jihan Kaisi, executive director of Lebanese NGO the Union of Relief and Development Associations (URDA).

“And at least 100 Syrian families have been severely impacted. They now need everything from food and medicine to home rehabilitation,” said Kaisi.

The UNHCR promised $35m to help 100,000 people affected by the blast, regardless of their nationality. But Syrian refugees and migrant workers remain more vulnerable than others, say aid organisations.

“Syrian refugees were already part of the most vulnerable sector in the Lebanese society,” said UNHCR’s Elnaeim.

“In recent months, the coronavirus pandemic and deepening financial crisis pushed the number of refugees living under extreme poverty in Lebanon from 50 to 75 percent,” he added, referring to a prolonged economic crisis and lack of basic services that sparked mass anti-government protests that have continued since last October.

“After the blast, they’ve been pushed further down.”

Tabaja agreed, saying that “Syrian refugees have an added layer of vulnerability”.

“It is harder for them to find work or adequately paid jobs,” she said, explaining that access to healthcare was another obstacle.

Although the Lebanese government promised to provide free hospital treatment to everyone affected by the explosion, media reports indicated that some hospitals have refused to treat Syrian refugees. 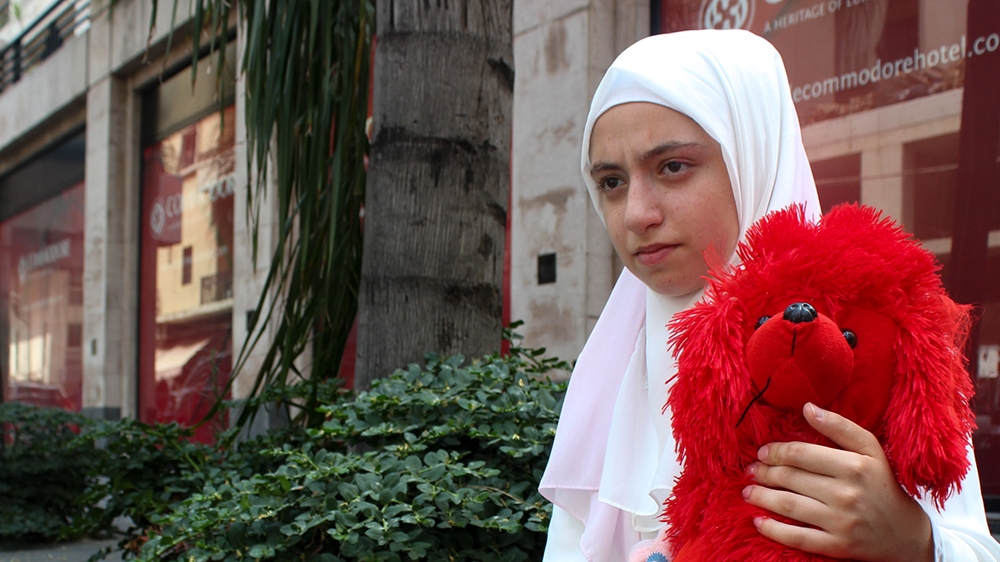 ‘Wish I had died’

Fatima has spent her days since the blast trying to reach relief organisations to help her family.

Meanwhile, Dima – who stopped attending school two years ago after her father could no longer afford the school bus fees – has divided her time between visiting her sister in hospital and taking part in aid distributions near the port.

“Going to the hospital and volunteering keep me busy, but nothing can really take my mind off my sisters and mother,” said Dima, as she looked away and clutched the red toy more tightly.

“I just wish I’d remained under the rubble and died with them.”