In April this year, wind energy company Eolus Vind broke ground for the Oyfjellet wind plant, a new wind power project in Saepmie, the ancestral lands of the Indigenous Saami people, which stretch across Norway, Sweden, Finland and Russia. This led to a conflict between the Norwegian authorities, project developers and the Saami reindeer herding community Jillen Njaarke, which reveals the numerous reckless practices behind Europe’s “green” energy transition.

The German owners of the Oyfjellet wind project, Aquila Capital, have already made a lucrative deal to supply the power produced by the wind plant to the nearby aluminium smelter by Alcoa. On the project’s website, the developers claim to “promote growth, green industry and green employment through long-term investment in renewable energy”.

Considering the effect of their actions on the Jillen Njaarke, their mission statement is not only misleading, but is also covering up the fact that the project is disrupting the sustainable way of living of the Saami community, which protects their land.

Research demonstrates that the Saami’s semi-domesticated reindeer avoid grazing in areas where they can see or hear wind turbines. A project such as Oyfjellet would disrupt the migration of reindeer, especially in the winter, when they are often weakened and at risk, particularly pregnant mothers and newborn calves.

It is yet another source of distress for the Sami herders and their reindeer, adding to the uncertainties of a rapidly changing climate, increasing pressures on ecosystems and land grabbing.

On paper, the Norwegian reindeer herding act should provide legal protection against the blocking of reindeer migration routes, like in the case of this new wind plant project, but the Norwegian authorities allowed the construction to move ahead.

On June 31, the reindeer Saami herders from Jillen Njaarke announced they were going to court to stop the wind plant. They are determined to protect their lands from yet another encroachment by the Norwegian authorities. The community is genuinely afraid for its future.

“Humans are born, and they die, but the mountains live forever,” Heihka Kappfjell, a 53-year-old reindeer herder from Jillen Njaarke, told us. “What frightens me the most about the wind industry is that without the mountains there is nothing left for us Saami. Nothing that protects us, takes care of us and gives us comfort.”

Some 98 percent of Norway’s electricity production today comes from renewable energy sources. But in most public debates or political decisions, the detrimental impact that this has had on Saami livelihoods is readily overlooked. The Oyfjellet wind plant is not the first encroachment Jillen Njaarke have faced. Various hydropower plants in their land have reduced pastures and have exposed their herds to a higher risk when crossing unstable ice on water dams.

The Norwegian government has already given out more than 100 additional concessions for wind power developments, some of which fall on Saami land.

And it is not just Norway that has endangered the Saami livelihood pursuing “green energy”. Across Saepmie, the governments of Sweden, Finland and Russia have also promoted energy and resource extraction projects that make it impossible for the Saami to continue their traditional ways of life.

Across Europe, wind power is presented as a climate solution that will pave the way for a sustainable future. Through policy programmes such as the European Green New Deal, many governments lower taxes, offer subsidies and loosen regulations to advance renewable energy production.

The conflict around the Oyfjellet wind plant shows how such policies can contribute to Europe’s long tradition of oppression and destruction of indigenous territories. The Saami community consider these kinds of programmes “green colonialism”.

Regrettably, many vocal environmental movements in Europe tend to remain silent on these issues. Thus they offer implicit support for the colonisation of Indigenous peoples and lands in the name of “environmentally friendly” resource extraction.

In 2016, the UN special rapporteur on the rights of Indigenous peoples published a damning report that highlights the Saami people’s struggle against land grabs in Saepmie. Echoing many researchers, Saami politicians and organisations like Protect Sapmi, the report warned of the devastating impact of industrial developments in the Saami ancestral land and called out the ongoing violation of Saami rights.

“In addition to all of the infrastructure developments, there is also the construction of ever more cabins, mines, and power stations. They say it’s only a little bit here and there, but in sum, it is quite a lot,” Per Martin Kappfjell, a 28-year-old herder from Jillen Njaarke, told us. Such encroachment transforms Saami land into a traumatic stress environment for herders and reindeer.

Unfortunately, the case of the recently constructed Fosen wind power complex, situated some 300km (190 miles) south of Oyfjellet, does not provide much hope that going to court would bring justice for the Jillen Njaarke community.

The Saami reindeer herders from Fovsen Njaarke community took legal action against Fosen Vind, the developers of Europe’s largest onshore wind power complex, located on the Fosen peninsula. The reindeer herders argued the construction would violate their right to practise their indigenous reindeer herding culture in the future.

Earlier in June, the Frostating Court of Appeal recognised that a third of the community’s winter pastures were destroyed by the construction and ordered 89 million krones ($9.4m) to be paid as compensation. The verdict shows that proving that wind energy projects need be stopped to ensure the cultural survival of the Saami is incredibly difficult.

“Under a certain level of doubt”, as the verdict states, monetary compensation will save the herd and thus hinder a violation of international law. However, the court’s argument assumes that the Saami will embrace short-term and high-cost technical fixes for their loss of pastures, like relying on the import of processed fodder to feed their herds during the winter. Consequently, the court forces the herding community to choose between making those changes or abandon reindeer herding altogether.

“This verdict shows that human rights conventions in Norwegian law do not protect us Saami”, Arvid Jama, a reindeer herder from the affected Saami reindeer herding community in Fosen, told us.

By awarding the community compensation for their losses, rather than stopping the operations of the wind plant, the court has put a monetary value on the Saami way of life. In other words, it reinforced the tendency of the Norwegian government and the industry to “sell” indigenous rights in the name of development and resource extraction.

“Herding is not a money industry. It’s a way of life. It’s cultural heritage, your family, your identity, your connection to the land”, Silje Karine Muotka, member of the governing council at the Saami Parliament of Norway, said after the verdict. “We have a saying in Saami – It takes a village to raise a kid. This includes taking responsibility for the relations between humans, reindeer and the land.”

The mutual dependence between humans, the lands, waters and “non-human relatives” is integral to Saami world views and ancestral practices. This kind of reciprocity should also be central to finding new and more effective solutions to current global challenges, such as sustainable food production, community resilience and land use.

As democratic processes led by majoritarian societies fail to include indigenous perspectives, exhausting and expensive lawsuits become one of the only pathways left for the Saami community. Yet, at the core, these kinds of conflicts are not merely legal problems. They call into question the fundamental principles underlying our ways of organising as societies. 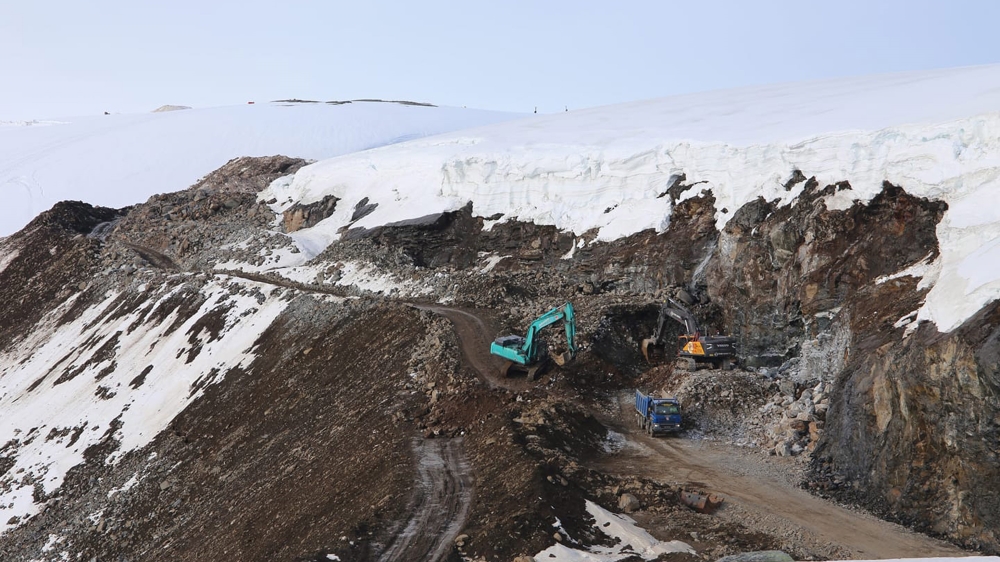 What does it say about us as a community if we disregard significant violations, such as in the cases of Jillen Njaarke or Fovsen Njaarke? What kind of humanity are we striving for when the destruction of indigenous cultures fuels climate action?

Sidelining human and indigenous rights from the climate agenda is a much broader issue. Norway’s updated commitment to the Paris Climate Agreement from February 2020 barely mentions the importance of consulting Indigenous communities. In practice, the Norwegian government’s continued support for “green colonialism”, makes the statement seem like nothing more than an attempt to uphold a questionable image of Norway as a frontrunner of climate action and protector of indigenous rights.

These kinds of deceptive strategies are typical for colonial nations. Technically, there were “consultations” with the reindeer herders of Jillen Njaarke before giving the green light to the construction. However, the government and developers never considered whether the Indigenous herders wanted a wind energy complex at all. According to the herders, they were only allowed to pick between two different yet equally damaging projects.

“We got to choose between being shot in the left or the right leg,” Heihka said of the “consultation”. The actions of the government, Eolus Vind and their lawyers were “completely against democratic principles”, he added.

The “green” energy industry promises to build a sustainable wonderland with electric cars and bullet trains powered by limitless renewable energy supply. It reinforces the dangerous idea that we can maintain our addiction to high-energy lifestyles in a sustainable way.

The wind energy sector on Saami territories is an extractive industry, and we have to treat it as such. It is high time to acknowledge the renewable dystopia taking shape in Norway and beyond. The key to a green future is not in the hands of renewable energy companies under the doctrine of ever more profits. Instead, we should work together with Indigenous communities who have been nurturing and defending our environments for centuries.

We are in a climate and ecological emergency with hugely disproportionate effects on Indigenous peoples, Black people and people of colour. If we want to enable green ways of living, there is an urgent need for “climate justice” and a “just transition”. But rather than repeating empty, “green” slogans, we need to question what “justice” really means, and whom it currently serves. This requires us to listen to those who are most affected and provide active support for multi-front anti-colonial struggles.

Susanne Normann also co-authored this article. Susanne is a research fellow and PhD candidate in Psychology at the Centre for Development and the Environment, University of Oslo.

The views expressed in this article are the authors’ own and do not necessarily reflect Al Jazeera’s editorial stance.