Baghdad, Iraq –  The anti-government protests sweeping Baghdad and a number of Iraqi cities have often been referred to as the “uprising” of the country’s embittered youth – men and women in their early 20s fed up with a ruling elite they say is old, nepotistic and corrupt.

But one look at Baghdad’s Tahrir square – the epicentre of the relentless protest movement – is enough to lay bare that the demonstrations calling for an overhaul of the political system do not belong to a single generation.

Past the square’s Freedom Monument and beneath the trees of the Ummah Garden, the crowd that has for weeks been gathering in the heart of the Iraqi capital is a mixture of old and young united under the Iraqi flag.

The protests, the biggest since the fall of Saddam Hussein in 2003, have seen Iraqis bridging generational, gender and religious gaps to demand an end to rampant corruption, high unemployment and poor public services. But they have also been met with a harsh response by security forces, with more than 260 people killed and thousands wounded by security forces since the demonstrations broke out on October 1.

A stone’s throw from Tahrir Square, on Jumariyah bridge, a group of young men stand their ground atop a makeshift barricade made of corrugated metal sheets and concrete blocks. Like many other buildings in Baghdad, their fortress is draped in the Iraqi tricolour. 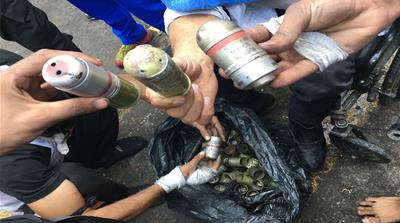 Mostly hailing from Baghdad’s working-class areas, these young Iraqis were born into the midst of the US-led invasion in 2003. Their childhoods coincided with the country’s bloody sectarian violence, while for many their adult years have largely been unemployed.

“We are free men and we govern ourselves, not Iran,” said one man with an Iraqi flag wrapped around his mouth and nose, referring to Tehran’s perceived involvement in Iraqi politics.

Entrenched along the eastern bank of the Tigris River, some of the youth at the movement’s deadly frontline wear helmets; others cover their faces with masks and scarves to avoid inhaling tear gas or being recognised by what they say are government infiltrators.

Human Rights Watch said on Friday that cartridges were being fired directly at protesters, while a United Nations Assistance Mission for Iraq (UNAMI) report published this week put the death toll from tear gas canisters penetrating upper bodies at 16. 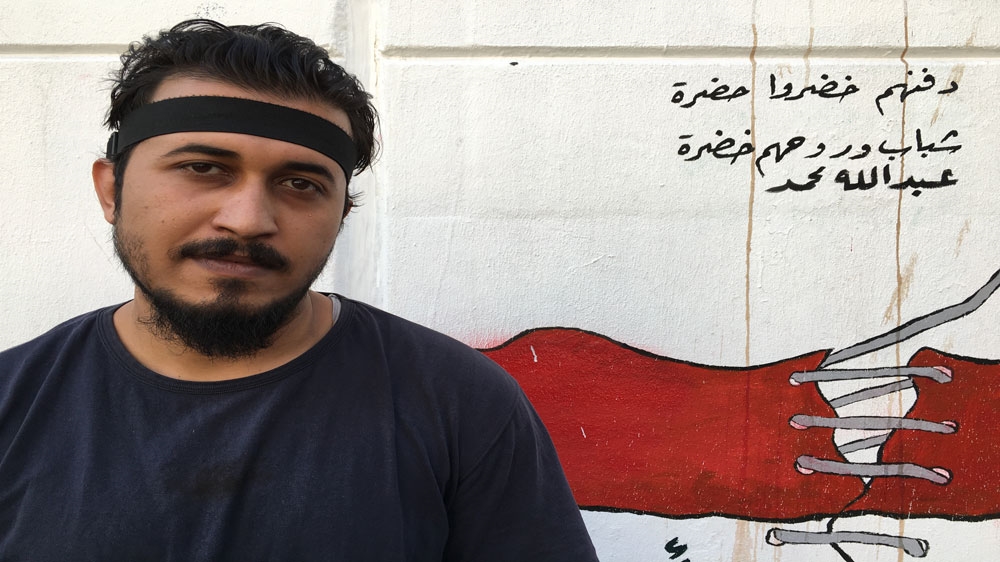 Al Hamsa Hamid, 29, is one of the young men at the forefront of the protests [Sofia Barbarani/Al Jazeera]

“There’s a difference between waiting to die and going to die,” said 29-year-old Al Hamsa Hamid, standing against the backdrop of one of the city’s protest-inspired graffiti.

In 2013, Hamid joined the Iraqi Counter Terrorism Forces, and in the years that followed he fought against ISIL and helped in the recapturing of the city of Fallujah from the armed group. But in June 2017, overwhelmed by a sense of responsibility towards his family, Hamid – an only child – left the forces to take care of his parents. He has since been working as a photographer.

In a country where youth makes up more than half of the population, he is one of the few with a permanent job.

Like other young men, Hamid first joined the protests when they first broke out in early October. Then, he says, he was just an ordinary protester, with no concrete role. Now, he is one of the many young men known as “goalies”, tasked with stopping and neutralising deadly tear gas canisters volleyed across the river by security forces.

“I’m doing it for the future of my children, I don’t want them to suffer like I did,” Hamid said. “And for dignity, I don’t want militias in my country, we want a democracy,” he added, in reference to the powerful Iran-aligned paramilitary groups in Iraq. 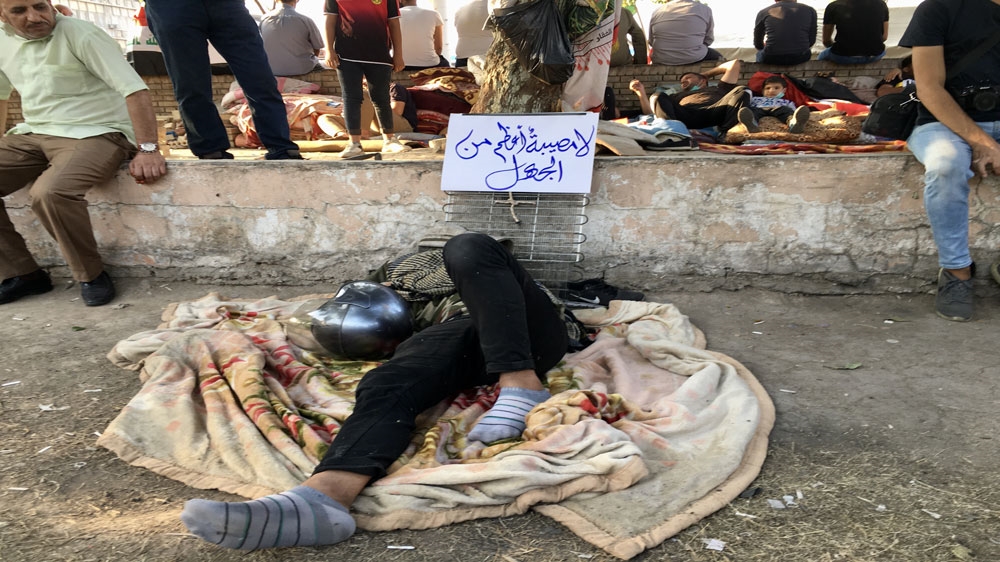 A protester sleeps under a sign that reads: “There is no greater misfortune than ignorance” [Sofia Barbarani/Al Jazeera]

Others are operating as volunteers behind the scenes – a role that is also not without dangers. According to UNAMI, six protesters of volunteers providing assistance in the Baghdad demonstrations have been abducted by unknown assailants.

One of them, 36-year-old volunteer and activist Saba al-Mahdawi, had been providing medical supplies in Tahrir Square on November 2 when she was taken on her way home from the protests. Her fate remains unknown.

Like al-Mahdawi, 18-year-old medical student Nour Hamid, who asked her real name not be used, has been lending her support at one of the many tents across the square.

Nour Hamid comes from a middle-class family who has puts her through a private university. Her family, she said, was not keen on her volunteering at the protests.

“They’re afraid, but they know that whatever they say I won’t go home,” added Nour Hamid, who dons a white doctor’s coat. “Once you come [to Tahrir], you can’t go back.”

Volunteers say medics are receiving threatening messages from unknown numbers and being purposefully targeted by security forces. One doctor was killed and another wounded on Wednesday while aiding demonstrators on Baghdad’s al-Ahrar bridge. 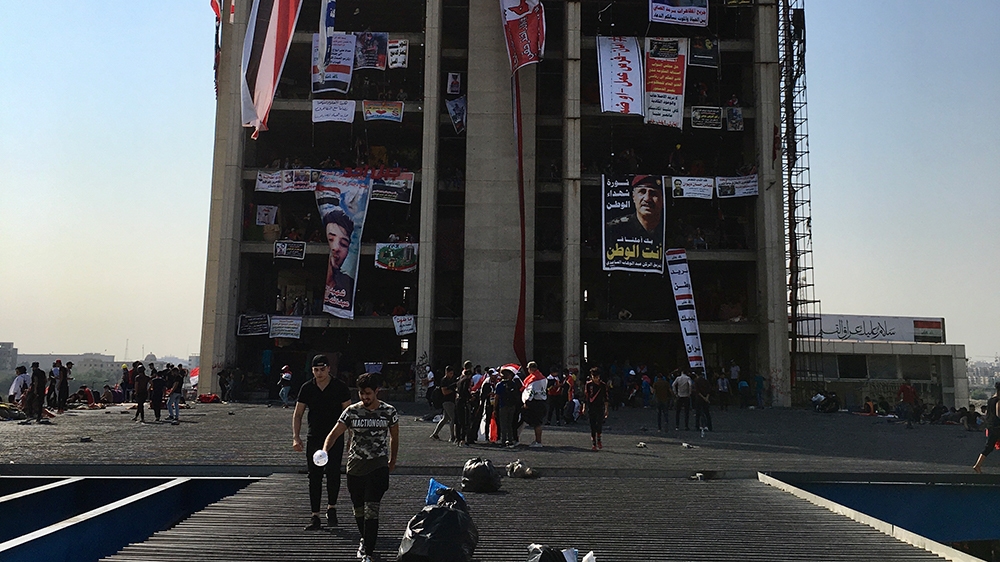 On the ground floor of the “Turkish Restaurant” tower, a strategic building that was taken over by protesters on October 25, 79-year-old Saadiya Ali sits on the concrete floor.

“We want the Iraqi government to protect our young people,” says the elderly woman, surrounded by a group of teenagers who gathered around her to keep her company.

Ali’s son was killed at the height of Iraq’s sectarian violence in 2006. Today, she lives off with his pension, which she says the government has been steadily decreasing over the years, making it hard to survive.

Iraq is one of the world’s top oil producers – according to the International Monetary Fund, the country’s gross international reserves for oil reached $65bn by the end of 2018, yet much of its 40 million population suffers from inadequate basic services and lack of economic opportunity.

“They took the rights of the youths away,” said a 64-year-old former soldier, who asked to remain anonymous, lamenting that two of his three sons were without a job. 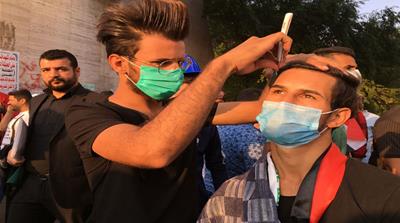 “We won’t go back [just] because they give us jobs, we want to replace this failed system,” he added, before claiming that “dirty militias are doing the dirty work”.

Iraq’s top cleric Ayatollah Ali al-Sistani on Friday warned against the exploitation of the unrest by internal and external forces and the use of “excessive force with peaceful protesters”.

Drawing people from across Iraq’s political and social divides, the protests have seen roads blocked and schools and courts shut amid a strike by teachers and lawyers.

Some of the older protesters have stopped going into work to support the demonstrations.

Hissam Jasm, 45, has not been to the office in over 10 days, and instead has been volunteering in one of the many food booths in Tahrir Square. “I’m doing this because everyone here is like my brother, I’m doing it for them,” he said.

A middle-aged civil servant who asked to remain anonymous said he had received text messages from his workplace warning him to resume his usual office hours. 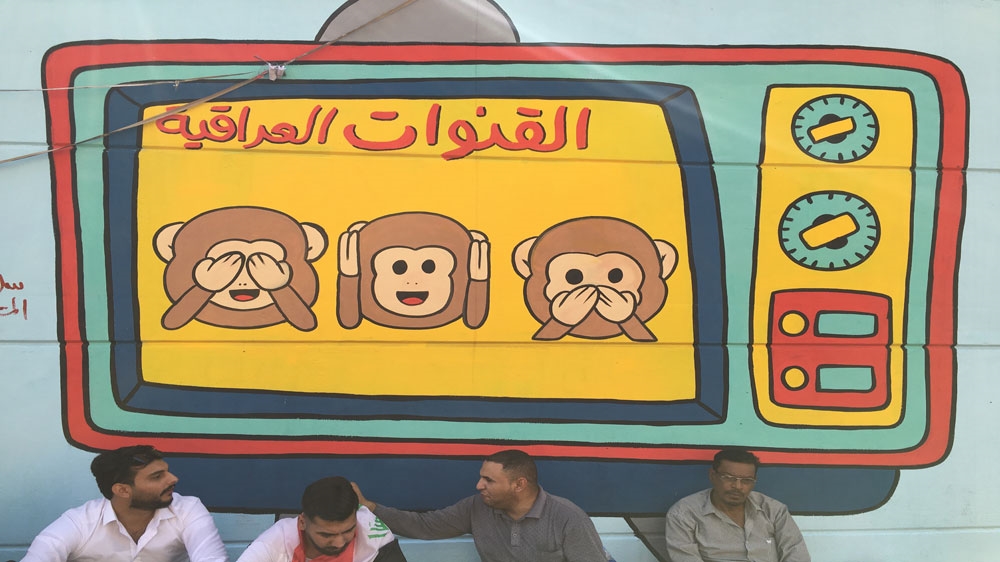 Embattled Prime Minister Adel Abdul Mahdi has appealed to protesters to help restore a sense of normalcy by suspending the demonstrations, which he said were hurting Iraq’s economy. He has said he is willing to resign if political leaders agree on a successor and has promised to enact a series of reforms – but the announcements have failed to appease protesters.

“We demand to know where the [country’s] oil money is going,” said Sara, a 15-year girl who asked her real name not be used.

The teenager said her father was fired from the Ministry of Oil when his wife was diagnosed with a tumour and he was forced to take time off to look after her. The family now suffers the financial consequences.

Speaking of the need for civil disobedience, the teenager said even students at school have been protesting.

Armed with an Iraqi flag, Sara is adamant that the protests against the ruling elite should continue.

“We’re here to take our rights back, and we will, for me and for the people.”