On August 13, 1961, East German forces closed the borders of East Berlin and encircled the allied sectors of the city’s western half. Two weeks later, American photographer Leonard Freed wandered along the internal edges of the divided city.

In those uncertain days of the Berlin Crisis, each side was on high alert, as the potential for conflict between the super-powers seemed imminent. It would take the East German Democratic Republic months to fully enclose West Berlin, but within a matter of hours and days, the newly fortified boundary was beginning to take shape: barbed wire, wooden barricades, torn-up pavement, bricks, and the rudimentary beginnings of a concrete wall. In the weeks that followed, soldiers from each side drew near to protect and inspect the implementation of the closed border.

Freed was fascinated by the implications of this Cold War front line. Berlin was again the epicentre of global conflict, in what he conceived as “a war of nerves” between the Soviet-led East and American-allied West.

By August 1961 Freed had been living outside America for more than five years. During his August travels, he spent his time close to the centre of the partitioned city. With the world on the brink of war, he pointed his camera toward one of the West’s last lines of defence: American GIs in the American sector of West Berlin.

From his earliest travels to Germany in the early 1950s, Freed pondered the ways in which history and memory influenced the nation’s postwar condition and, in turn, his own relationship to its people and landscapes. He wrestled with his Jewish identity in Germany and throughout Europe.

Freed was born in 1929 and grew up in Brooklyn, New York. His parents, Sam and Rose, were both born to Jewish families in Minsk, Russia, but met and married after they emigrated to the US, escaping a wave of pogroms in their native land around World War I.

The legacy of conflict in Germany weighed on Freed in August 1961, when he took a train from Amsterdam to West Berlin. He arrived with his close friend, Dutch journalist Willem Oltmans, on or around August 25. Neither man had an assignment or a particular itinerary.

As many around the world waited on edge for the breakout of World War III, Freed and Oltmans stepped close to the border.

Freed’s photographs and recollections from that trip, found in Oltmans’s private journals, attest to their movements near Zimmerstrasse as they stalked the Wall’s emergent path. Freed meandered through parked army tanks and jeeps, GIs squatting with trays of fast food, and pedestrians passing through a then-makeshift but heavily guarded Checkpoint Charlie on Friedrichstrasse.

On August 27, he and Oltmans crossed the city’s internal border to East Berlin, travelling down the monumental boulevard of Stalin Allee and into the Oberschoneweide neighbourhood. Later that day, back in West Berlin, Freed and Oltmans witnessed a frenzied evening scene on Moritzplatz in which US military tanks with searchlights, joined by jeeps equipped with speakers, blasted Elvis Presley music near the border wall to galvanise throngs of West Berliners who had gathered to protest against the still-fresh physical division of the city. 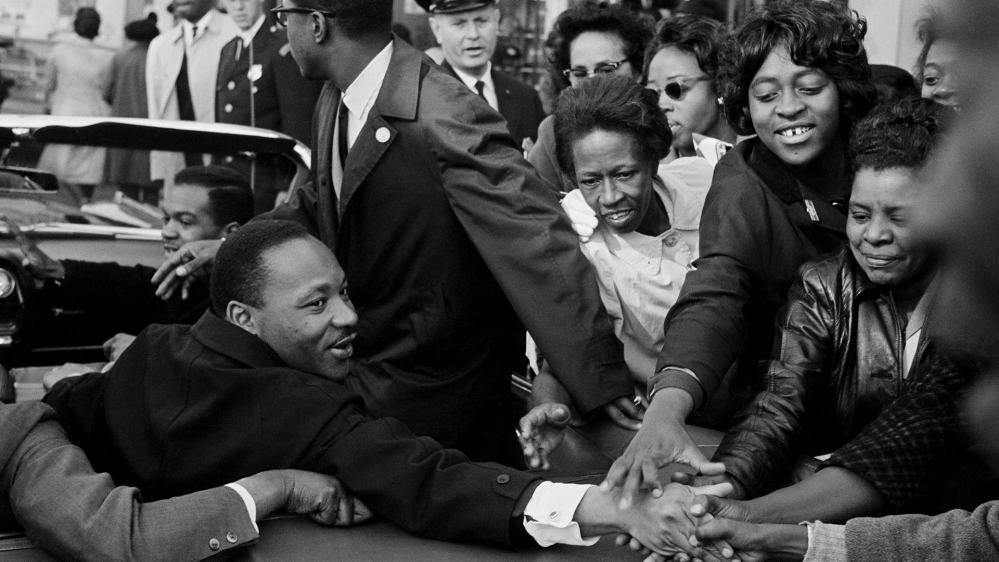 Baltimore, MD, October 31, 1964: Dr Martin Luther King, Jr. being greeted on his return to the US after receiving the Nobel Peace Prize [Leonard Freed/Magnum Photos]

Freed confronted his visions of a war-prone Germany in the American sector of a newly walled Berlin. In doing so, he examined American power along the border and reflected on his own expatriate status. But in the majority of his images from this trip, the new wall is barely visible. Instead, American GIs stationed by the border receive his most consistent and direct focus.

Many of the soldiers barely acknowledge Freed’s presence, while others cast sidelong glances at him and his camera.

There is one exception to this indirect viewpoint – when Freed faced head-on both the Berlin Wall and a fellow American in the same frame. The resulting image would haunt him, beckon his return from exile, remind the expatriate of his American whiteness, and transform his practice as a photographer.

Here, at the nascent wall, Freed snapped a photograph of an unnamed black soldier standing at the edge of the American sector. After lifting his finger from the shutter release, he left the scene without taking any more photographs. Freed’s contact sheets from this trip confirm that, unlike his other GI images at the Wall, in which he sometimes captured the same serviceman from several angles, this soldier image was a single shot.

We, he and I, two Americans. We meet silently and part silently. Between us, impregnable and as deadly as the wall behind him, is another wall. It is there on the trolley tracks, it crawls along the cobble stones, across the frontiers and oceans, reaching back home, back into our lives and deep into our hearts: dividing us, wherever we meet. I am White and he is Black.

Taken at middle distance in black and white, the frontal portrait features the uniformed soldier in the foreground, his eyes cast downward and to the side. Freed stands near the intersection of Zimmerstrasse and Charlottenstrasse streets, between trolley tracks that dead-end in the imposing boundary of the Wall. The soldier is outfitted in full combat gear, and a helmet weighs heavily on his head, suggested by a slight forward tilt. One of his fellow GIs can be seen in an army jeep behind him, travelling with another photographer, yet their attention is elsewhere, outside the frame. At the image’s highest magnification, the soldier’s nametag remains out of focus, but his uniform identifies him as likely being in the 2nd Battle Group, 6th Infantry in West Germany.

When Freed included the single shot as the opening image to his book Black in White America (1967/68), he identified the location as “Berlin, Germany,” citing the city as a whole, without distinguishing between East and West. His caption further calls attention to the soldier’s affiliation and stance: “In defense of Western Civilization, an American soldier’s hand rests on his gun.”

“We, he and I, two Americans. We meet silently and part silently. Between us, impregnable and as deadly as the wall behind him, is another wall. It is there on the trolley tracks, it crawls along the cobble stones, across the frontiers and oceans, reaching back home, back into our lives and deep into our hearts: dividing us, wherever we meet. I am White and he is Black.”

Freed’s annotation affirms the profound duality of this visual encounter: citizens of the same country stand mere feet away from each other as countrymen in an American-occupied zone in West Berlin, and yet the experience of racial division is laid bare. In fact, this image stylistically departs from his other American GI images at the Wall, as it is also the only image in Black in White America that presents racial division as static and impervious to interaction. Throughout the book, Freed locates fields of vision in order to wrestle with racial formation and his own whiteness. He does so by balancing distance while moving closer to his subjects (both African American and white), registering their gazes in numerous directions, and marking mutual recognition without erasing social lines of division implicit or evident in his photographic encounters. 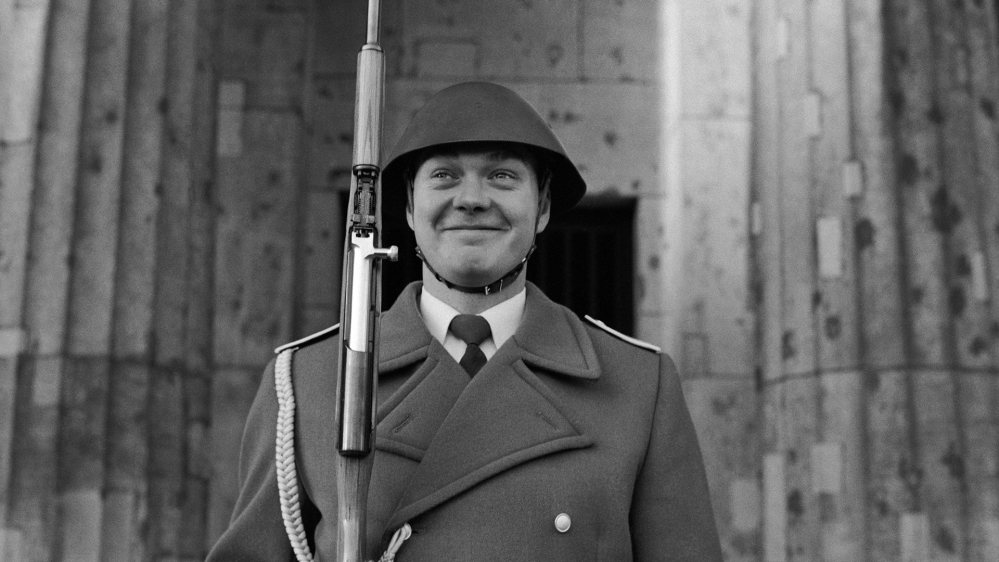 Just as he saw the Berlin Wall go up in August 1961, Leonard Freed returned on November 12, 1989, days after the border was breached. He captured images of an East German soldier standing outside the Neue Wache, the GDR war memorial on Unter den Linden. Freed recalled of that day: “Yesterday, if he had smiled while on guard duty this East German soldier would have been court-martialed. Today he can smile because he knows it will soon be over, the Wall has been breached.” Freed photographed the guard several times, from up close, waiting to get a frame in which he smiled back at the camera [Leonard Freed/Magnum Photos]

In June 1963, the Freeds took their darkroom enlarger and trays from their Amsterdam flat and packed them into their tiny Fiat 600. They sailed with their car on the Holland-America line from Rotterdam to New York. Soon after, Freed got to work on what would eventually become Black in White America.

The book-length photo-essay captured the persistence of racial division in America in the decade following the 1954 US Supreme Court mandate to end school segregation and through the landmark civil rights legislation of the mid-1960s.

Freed’s image of one of the many black American GIs at the Berlin Wall is emblematic of a central contradiction of Cold War American culture: a soldier guarding the US-Soviet Cold War front line abroad would, at the same moment, be denied full citizenship rights back home.

From A Wall of Our Own: An American History of the Berlin Wall by Paul M. Farber. Copyright 2020 by the University of North Carolina Press. Used by permission of the publisher. www.uncpress.org.

Colorado man speaks out after fighting off bear in kitchen