Mosul, Iraq – Two years after Iraqi forces captured Mosul from ISIL, locals say neighbourhoods along the riverfront of its Old City risk losing their historical identity due to a plan by local authorities to transform the area into a “modern city”.

Limited funding and an ill-equipped municipality have hampered efforts to rebuild the Old City following a fierce nine-month military operation to root out ISIL fighters who had seized Mosul in June 2014.

The battle left Mosul, Iraq’s second-largest urban centre and capital of Nineveh province, a dilapidated ghost city, with many of its buildings in ruins and hundreds of thousands of its residents forced from their homes.

Despite the widespread destruction, some of the displaced began returning shortly after the United States-backed operation against ISIL ended in July 2017.

And in the past few weeks, local authorities have proposed to local residents a plan aimed at revamping historic neighbourhoods along the west bank of the Tigris River – an area full of mostly ravaged souqs, medieval churches, centuries-old mosques, homes and schools – into a modern investment hub.

The proposal, put together by Mosul Governor Mansour al-Mar’eed and unidentified investors, seeks to create a “new city” with gleaming high rises, and large supermarket and restaurant chains.

According to Mar’eed, Mosul’s local government already owns some of the areas along the riverfront and hopes to begin the redevelopment plan once private owners are convinced to sell their destroyed properties and plots of land. While still a vision for now, local authorities have already begun talks with residents to convince them of the proposal, which, they say, is the only way to redevelop Mosul in the face of limited support from the central government in Baghdad.

Analysts say the plan is reminiscent of former Lebanese President Rafik Hariri’s redevelopment of Beirut following a devastating 15-year civil war ending in 1990 that ravaged Lebanon’s capital. That project transformed central Beirut into a sanitised and glossy version of its former self, displacing many local residents along the way.

Like in Beirut, the urban redevelopment plan in Mosul risks seeing many of its families – which have lived in the ethnically and culturally rich Old City for decades – making way for the construction of megaprojects.

But despite their difficult living conditions, residents who spoke to Al Jazeera said they would not sell or exchange their properties.

“If we sell our land, we sell our identity,” Nashwan Khairy, a 50-year-old labourer – believed to be the first to return to the Old City after the declaration of victory against ISIL, told Al Jazeera.

“This land is our pride and destiny,” he added. “Even if it [Old Mosul] is just a pile of dust, we will stay here.”

Speaking to Al Jazeera, al-Mar’eed, the governor, said that local authorities “will be speaking with the families within the next month … to convince them of the plan to build a modern city in the neighbourhoods along the riverfront”.

In a discussion with local communities last month, al-Mar’eed urged residents in the historic al-Shahwan neighbourhood to swap their destroyed properties with patches of land in East Mosul.

The next generation won’t even know what Mosul looked like.

His proposals, recorded by local journalists and widely circulated among Iraqis on June 19, created an uproar among Mosul residents.

In the video, al-Mar’eed is seen telling several men in traditional dress that the proposal involved a plan to transform their ravaged neighbourhoods into a “modern city”.

In response, the local men requested help to rebuild their homes, but al-Mar’eed insisted: “Let us turn the page and not look back at the topic of rebuilding your destroyed houses.”

As part of the proposal, al-Mar’eed last week called on Chinese companies to invest in Mosul’s redevelopment, noting that “soon competition will be fierce because many world companies are expected to come”.

A member of al-Mar’eed’s office told Al Jazeera that the governor also met with a French delegation last week to discuss investment opportunities in the city. 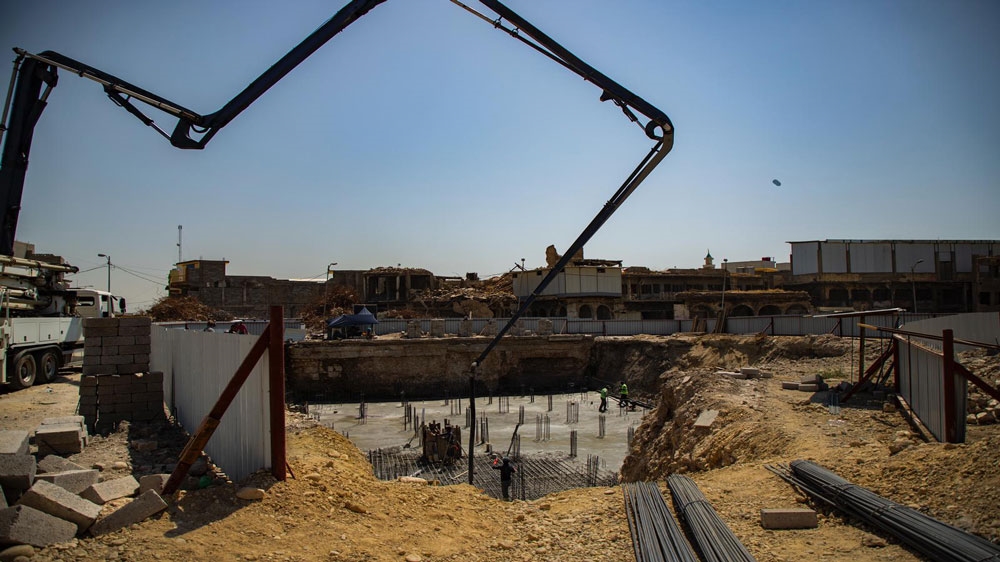 Like other new buildings rising across the Old City of Mosul, this redevelopment project fails to preserve the city’s architectural heritage, say experts [Moamin Al-Obeidi/Al Jazeera]

According to Mosul’s local authorities, the lack of financial assistance from Baghdad is the principal reason behind their redevelopment plan.

“With no aid from Baghdad, we could do nothing,” al-Mar’eed told Al Jazeera, referring to the destroyed homes.

“The government has not allocated a 2019 budget for the reconstruction of the Old City,” he adds.

Echoing al-Mar’eed, provincial council member Ali Khudair said that “the government doesn’t plan on compensating families in Mosul”, adding that it would be difficult to rebuild homes or preserve the Old City without any funding.

Mosul’s previous administration claimed to have received nothing of a $400m fund established in 2015 to help Iraq’s reconstruction, Reuters news agency reported in 2018. The city received only $252,000 in 2017 and in 2018, according to reports.

The United Nations and the Norwegian Refugee Council (NRC) have said that simply repairing Mosul’s basic infrastructure will cost about $1bn, while the Iraqi government estimates that double that amount will be needed. The estimates do not include a budget for rebuilding homes or restoring heritage sites.

But for Ihsan Fethi, an Iraqi professor of architecture and heritage conservation, the main obstacles facing Mosul are not just financial.

“There are too many agencies working separately without any coordination,” Fethi told Al Jazeera, adding that without a single authority to lead the efforts, the situation in the Old City risked becoming even more haphazard as families have also undertaken rebuilding efforts.

Ayoob Thanoon Younus, a Mosul-based activist and blogger, said that “with the government doing nothing, people have [already] reconstructed several old mosques, including al-Basha and al-Omaria”.

Since victory was declared in July 2017, the majority of reconstruction projects in Mosul has been carried out by international bodies, including NGOs and UN agencies, whose efforts have mainly focused on repairing basic infrastructure such as schools and health facilities.

With 53,000 homes flattened and thousands more damaged in West Mosul alone, some 300,000 residents remain displaced, according to the NRC’s 2019 report. 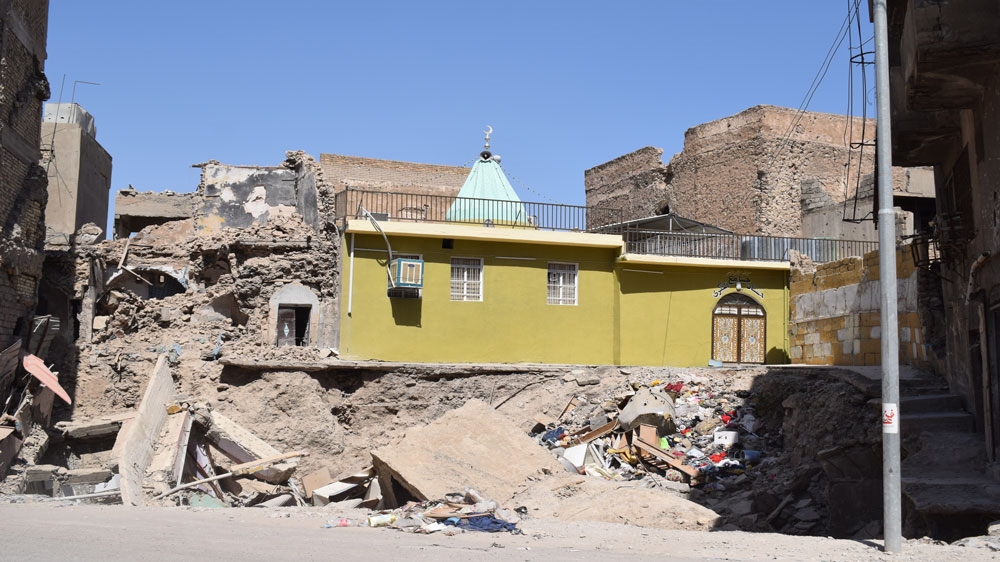 Located on the western bank of the Tigris River, the Old City dates back to the 7th century, spanning the Assyrian, Abbasid and Ottoman empires. A major learning centre and strategic commercial hub between East and West, it has over the centuries housed renowned schools, markets and religious institutions.

“The provincial council doesn’t understand the value of Mosul,” said Fethi, who is also an independent  consultant for the UN’s cultural agency, UNESCO.

“People know Mosul’s Old City by its riverfront – it has some of the city’s most important historic features,” Fethi added, referring to the city’s old wall, the citadel, palaces and other heritage sites along the Tigris’ west bank.

“It [the council] should aim to preserve Mosul’s heritage rather than turn [it] into another Dubai … an  absolute anathema to what should be done.”

While al-Mar’eed’s office said local authorities were in talks with UN agencies to hand them the responsibility to oversee the reconstruction of some of the area’s main heritage sites, locals and experts said they believed that many of them would still be lost if the redevelopment proposals went ahead.

According to Fethi, who has worked to document Mosul’s heritage for decades, the city’s previous governor, Nofal Hammadi – who was sacked in May over the death of at least 100 people when an overloaded ferry sank in the Tigris –  shared a similarly erroneous approach to rebuilding Old Mosul.

This land is our pride and destiny. Even if Old Mosul is just a pile of dust, we will stay here.

A few months ago, Khalaf al-Hadidy, a member of Nineveh’s Provincial Council told Iraqi journalists that the rehabilitation of the Old City requires “completely demolishing it so that infrastructure for a new one could be built” in a redevelopment plan that could “bring the province about $20bn in profit.”

Omar Mohammed, a history PhD student from Mosul, said the plan indicated the authorities’ lack of intention to preserve the city’s character.

“The next generation won’t even know what Mosul looked like,” said Mohamed, whose research focuses on the city’s late Ottoman period.

Diyari Salih, a professor of geopolitics at Iraq’s Al-Mustansiriya University, agreed, saying that the “geographic and urban features of Mosul … [would be lost by the] demolition and construction of this supposed project.” 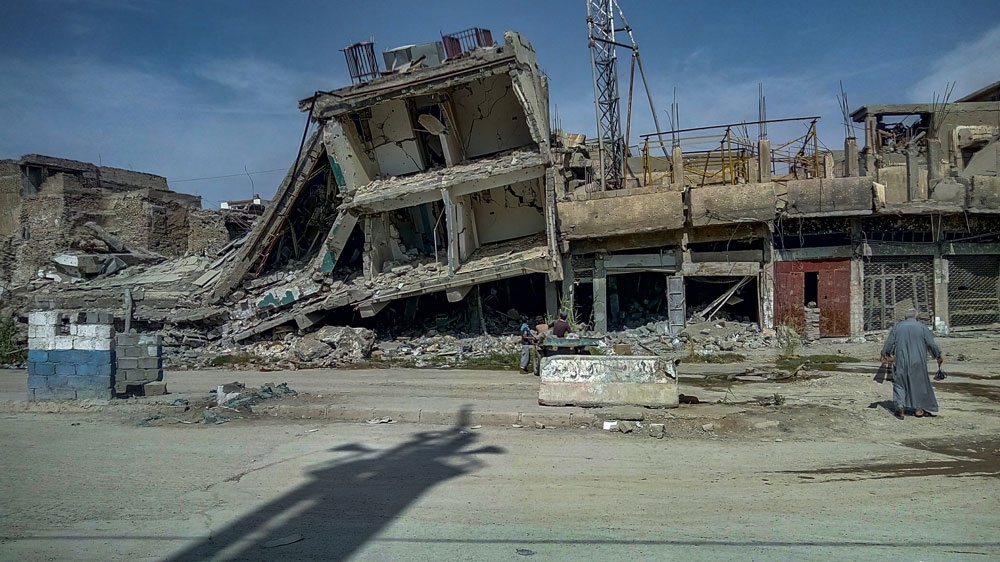 Locals and experts alleged that the redevelopment plan was also an effort to manipulate local communities into leaving their neighbourhoods.

“The governor is trying to take advantage of people’s financial need by offering them money so that they can leave their homes [in Old Mosul],” said Rayhan al-Mosully, a journalist from the Old City who moved to Erbil during the military operation to retake the city.

“Whatever price they offer, that value will multiply in a few years [if the redevelopment happens],” added al-Mosully, who said he wished to return to the Old City and rebuild his family home.

“Although people are told they can move to East Mosul – with newer and better infrastructure – people consider the Old City and West Mosul, part of their identity and that of forefathers.”

They should aim to preserve Mosul’s heritage rather than turn into another Dubai.

“Protecting the diversity and history of the Old City is the only way to maintain trust among its people,” he said. “How can you convince a Christian to return to Mosul, if their heritage is being obliterated?”

In addition to its diverse Muslim-Arab communities, Mosul was home to a significant number of minority groups including Kurds, Christians, Assyrians, Sabians, Shabak, Yazidis and a Jewish community which existed until the establishment of Israel in 1948.

After ISIL seized it in 2014, many of these minority communities fled their homes and remain displaced across Iraq. Fearing a resurgence of violence, many say they have nothing to return to.

But for Ali al-Husseiny, a 32-year-old resident of Makkawi, an Old City neighbourhood along the Tigris, nothing can replace Mosul’s character.

“Our souls are connected to this land. Even if we’ve lost our belongings and homes, we will never give up our heritage,” al-Husseiny said.

“No matter how much money they offer us, our history isn’t for sale,” he adds. 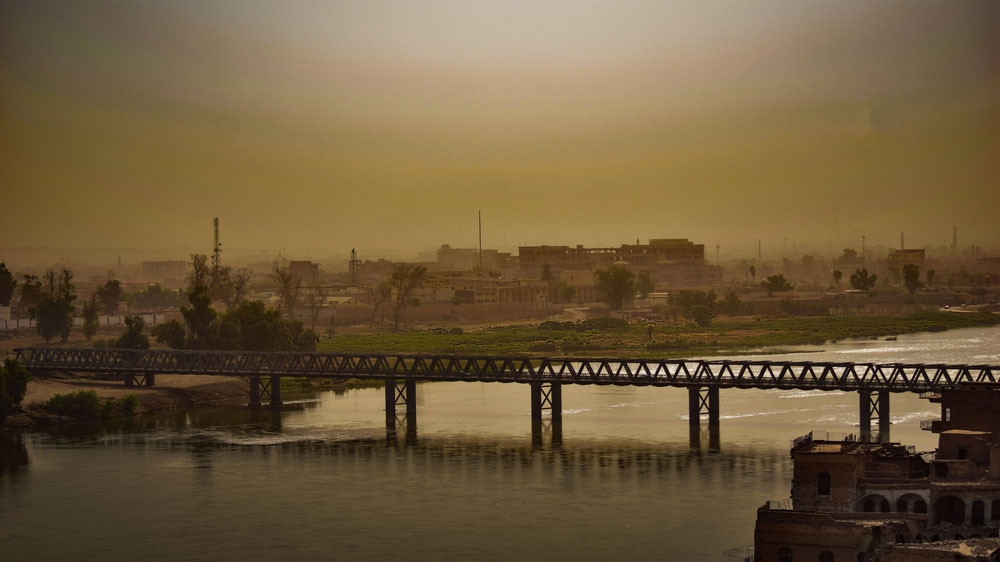